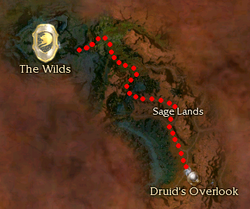 "Justiciar Thommis' younger brother Rhynnon was killed, supposedly by a gang of jungle-dwelling rebels. I don't put much stock in the rumors; how anyone could survive in that jungle is beyond me.

Anyway, he's right over there, but I wouldn't disturb him if I were you. Unless you're here to help him track down his brother's killers...."

Accept: "I can do that."
Reject: "I don't know why I should."
When asked about quest: "Justiciar Thommis is the loud fellow over there. You can't miss him."

"This heretic filth has continued long enough! I refuse to sit by while the Confessor and his council discuss and debate. We will move while my brother's blood is still warm. As we speak, I am amassing a host the size of which Kryta has never seen before. The song of battle will ring through out the jungle. Legions of knights will march right into its depths and tear it from stone and earth! My brother's murderers will be brought forth and purged in the great fires of justice.

We must stay on their trail! I sent my scouts up ahead, but I fear they may not be swift enough to keep pace with those blood-stained heretics. You will have a better chance. When you catch up to my men, tell them to report back. I am counting on you to track these rebels through the Wilds."

"I will report back as soon as this area is fully scouted.

They have taken this main path here. I tell you, no on can navigate this jungle more nimbly than those rebels. If it weren't for their lawless nature, their contempt for everything we stand for, their constant raids, and their under handed tactics, I wouldn't half mind seeing them in our ranks. But don't tell his grace I said that! He'd have my head.

There are other scouts up ahead, though; perhaps they've found something."

"You are the ones who saved our great confessor! No wonder his grace sent you out ahead!

That Thommis is a just man. There are some who question his heavy-handed methods. Not I, for one! It makes me sick to think what those filthy rebels did to those brave Justiciars. His grace will deliver them the justice they deserve.

I'll head back as soon as I finish up here. I sent Rionel up ahead to see if he couldn't find something."

"Report back? We should be moving forward!

From the looks of things, they led the Chosen right into the heart of the jungle. How they get through this tangled mass is beyond even my abilities. They move like spirits through the overgrowth, disturbing nothing. They're nearly impossible to track!

Not to question his tactics, but I doubt it will matter how many knights and justiciars his grace brings to bear. This jungle won't yield up its secrets anymore than it will bring his brother back."

"I am here on the authority of Confessor Dorian himself. Stay a moment and hear what I have to say.

While Justiciar Thommis's rage toward the heretics who slew his brother is understandable, we cannot afford to send scores of knights on a frontal assault into an unmapped jungle, all the while allowing the undead to march unchecked across the Krytan countryside.

I will bear the burden of informing the Justiciar that his forces are required for the defense of Kryta. As for tracking these rebels into the Wilds, I leave this matter in your hands. Numbers will not be on your side, but the Unseen Ones will watch over you."

After exiting Druid's Overlook, Justiciar Thommis will stand right in front of you. After speaking with him follow the path along the valley to the north to speak with House Ranger Amon (you should already see him from there). Further to the northwest, along the same track you'll find House Ranger Lanalt. Then turn northeast, and follow the path away from the valley. Turn east, cross the bridge over the valley. That's where you find House Ranger Rionel. Continue along this path and you'll get to The Wilds, where you'll find Witness Giselle. Note: The last part of the path has some nasty pop-up surprises in store for you, such as a pack of the poisonous Maguuma Spiders. Throughout the jungle you should stop short of foes you see just in case there are pop ups in front of them.