A Gate Too Far 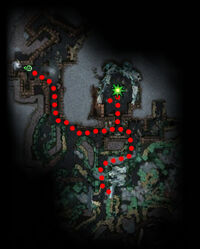 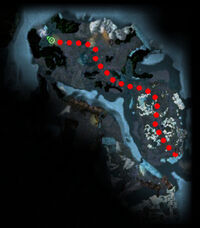 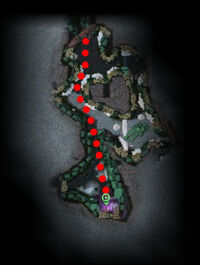 Automatically added after completing Vision of the Raven Spirit
After first completion, can be obtained from

Vision of the Raven Spirit

Shadows in the Night

Speak to Olaf and he will transport your party into Raven's Point. Once inside, head north toward quest marker on your map. In this room you will have to defeat a Destroyer Tremor and four groups of two Destroyers each that appear in sequence. After clearing all nine destroyers, you can talk to the Shrine of the Raven Spirit to obtain the temporary skill Raven Blessing. Taking the temporary skill is optional and unnecessary.

Raven Flight prevents knockdowns, which can be useful against the Destroyer Tremors, who use the monster skill Tremor to knockdown everyone in earshot range for 4 seconds. Spellcasting and bow range are larger than earshot, so casters and ranged attackers can remain just outside the effect, but melee characters should make use of Raven Flight or bring other anti-knockdown skills. Ward of Stability can be particularly useful, as it will also affect the Norn NPCs and any minions.

Head south out of the room and follow the trail of destroyers to the next level of the dungeon.

You can speak to Olaf to re-equip the Raven Blessing skill if you wish. The second floor is populated with groups of Vaettirs, which often despawn and are replaced by destroyers as you approach. Fighting on this floor is completely unnecessary, as you can run past all of the mobs.

Take the eastern path (not the one shown on the map) to completely avoid all the enemies in the first room. In the second room, depending on exactly where the destroyers appear, it is usually possible to sneak past the first group by hugging the left-hand wall, then past the second group by turning north and hugging the central pillar. If the destroyers do attack, you can just let the Norn fight them and keep running to the portal.

As before, you can speak to Olaf to reacquire Raven Blessing if you wish. The third floor has several small groups of destroyers, many of which have a destroyer tremor spawn in their midst as you approach.

The first room here has an exit to the right and to the left, each guarded by two destroyers. If you approach the center of the room, though, a Destroyer Tremor will pop up, and all four destroyers will move to it. Hugging either wall can sometimes avoid triggering the Tremor. This way you can also pull the two groups seperately before triggering the pop-up.

The right-hand path is shorter, so go that way and past another tremor to a darkened cavern filled with destroyers. A third Tremor will pop up in the middle of the room as you clear out the destroyers. At the south end of the room is the Asura Undergate that you must destroy. Additional destroyers will appear through the gate periodically as you are attacking it, but you should be able to ignore them. After destroying the Undergate, a cutscene will take place between Olaf and Ogden, and you will be returned to Olafstead.

Hard mode greatly decreases the recharge time of tremor, which allows the destroyer tremors to keep party members knocked down and helpless a large fraction of the time. When combined with inept AI for henchmen and heroes and the increased mob damage output of hard mode, this can be quite dangerous. Therefore, it helps immensely if you pull mobs away from the destroyer tremors, and then fight the tremors at full spell range (that is, out of earshot) after the rest of the mobs in the area have been cleared.