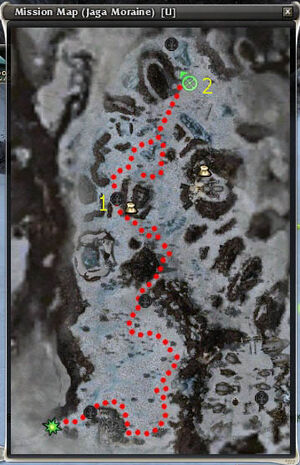 "Most humans believe strength is merely the means to shape or break. The Norn understand that strength comes not just from the body, but from the spirit. The bear is the symbol of strength, resolve, and pride of power. Our strength leads us to overcome every challenge, not because we can but because we must. I wonder how much of that humans truly understand.

A group of our younger warriors, who think themselves great hunters, are nearby, filled with bravado and ale. They seek a mighty bear to prove themselves and earn their names. I plan to grant their wish... with a hunt they will not soon forget.

Honey is rare in these parts, and all bears love it. No doubt, if they are hunting they stashed away a bit of honey attract the bear to their location. Now within Jaga Moraine lies a particularly large polar bear. Take their honey, find this bear, and lure the bear to those brave young hunters. Let us test their mettle and see if they are Norn truly worthy of their names."

Accept: "Let's see if they're smarter than the average bear."
Reject: "I do not wish to meddle in the affairs of Norn."

Bran: "There's barely any bears for us to hunt!"
Brosa: "Barely any bears? Ha. Bran, you are a mountain of mirth and wit!"
Skeggi: "His words are as sharp as arrows!"
Dagfinn: "Sharp as arrows? That sounds like a line from a song!"
Nafni: "Ha ha! Let us write a new song, then!"
Brosa: "I'll start. Brenton, Brenton, his words as sharp as arrows.... He, ah, what rhymes with arrows?"
Dagfinn: "Sparrows?"
Bran: "We are far too mighty to hunt sparrows!"
Skeggi: "What about barrows? He sends bears to their barrows?"
Dagfinn: "How about, "his blade rends bone and marrow.""
Nafni: "Naw, I've got it. his wordssh as ssharp as arrows, he's really...really great. *hic*"
Brosa: "That doesn't rhyme at all! Are you drunk?"
Nafni: "No. No. No... Yes!"
Skeggi: "Good idea, Nafni! Drinking will help our creativity!"
Bran: "Well, another round for us all!"
Bran: "Ah, the frozen white Shiverpeaks! The bears here are finer than anywheres."
Skeggi: "We live in a hunter's paradise! Let us drink to our homeland, and its heroes!"
Dagfinn: "Say fellows, you know what we need?"
Brosa: "What's that?"
Dagfinn: "We need a skald! Someone who will follow us and write tales of our epic deeds!"
Nafni: "Our deeds are indeed epic. Epic...deeds...indeed! *hic* Ha ha!"
Skeggi: "Only the greatest skald would suffice. No common tavern rube is fit to sing of Bran's exploits!"
Brosa: "Where would we find such a man?"
Bran: "Heroes don't find skalds. Skalds find heroes...and follow them of their own accord."
Nafni: "Then we must have another hunt, the *hic* greatest hunt we've ever undertaken!"
Bran: "Hmm. What shall we slay, fellows?"
Skeggi: "A possum!"
Nafni: "Yes. A possum! Wait *hic* that doesn't sound very epic."
Skeggi: "It could be. A possum bit me once."
Dagfinn: "Really? Where?"
Skeggi: "Right on my.... Oh, in the forest. It really hurt. Couldn't sit for a week."
Dagfinn: "Oh. Well. Have another round to soothe the pain...of old memories!"
Brosa: "Aye, that's more like it. A few more of these and I'm sure an adventure will soon follow!"
Nafni: "And women, too!"
Bran: "Here's to our land, where the bears are big, and the women are bigger!"
Nafni: "And just as bad tempered.... All the more reason to drink, I say."

Intermediate Dialogue 2 (spoken when each named hunter is scared away)

"Do you now understand what separates a hunter from his prey? A true Norn never turns away from danger, never flees before a challenge. We will not back down. That is true strength of spirit. If you are to survive in these lands, to face the perils that lie ahead, you would do well to learn the same."

To complete this quest, just go to Jaga Moraine and head north. Around location 1 on the map you will see the Branch with Honey. Pick it and immediately a Polar Bear will follow you. Go to the position 2 on the map - you will see five talking hunters. Walk up to them while holding the branch to scare them away. The quest is done, see Hogni Truthseeker for your reward.

Very near to the group of hunters, a snowball will spawn. If the snowball kills the Polar Bear following you, you will be unable to complete the quest.

This is, by far, the easiest and cheapest way to get the 3 honeycombs to be used in Lieutenant Thackeray's scavenger hunt, so keep them.