Path from Rata Sum to initial meeting with Renk 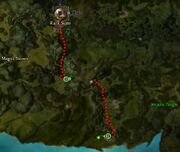 Path to Renk after recruiting Gadd and Oola

"We need Renk for the G.O.L.E.M. project. He's bright... intelligent, even. Lately, he's been hanging around Riven Earth researching the flow patterns of mountain waterfalls. Apparently he sees patterns in things where others just see chaos. It seems odd, I know, but you never know what these geniuses will find interesting. Find him and bring him aboard. I'm sure he'll want to help us."

Accept: "I'm here to serve all your staffing needs."
Reject: "He got a better offer elsewhere."
When asked about quest: "Renk has been spending time in Riven Earth. Check the waterfalls."

"Look atop these falls. Look at the pattern the water creates. Beautiful, isn't it?"

When asked about quest: "Yes, this G.O.L.E.M. project is exactly what we need to take care of those blasted Destroyers. I'll head back to my lab to begin the preliminary work. See me once Gadd and Oola have joined us. Their expertise will be invaluable."

"Don't concern yourself with my well-being. The research is more important."

When asked about quest: "Thank you. Those Destroyers appeared out of nowhere. Pay no attention to my injuries...I'll live. But my research for the G.O.L.E.M. project is incomplete. I... I haven't determined the final calibrations. There isn't much time. Go. Take my findings to Mamp in Rata Sum. He's in charge at the golem foundry. They must finish my work!"

"Renk is a perfectionist. His injuries must have been grave for him to pass his task on to others. Gadd and Oola are working at the golem foundry, finishing the preparations. Perhaps they can make sense of Renk's work. Speak to me when you're ready to visit the foundry."

Find Renk in the far east end of Riven Earth just south of the entrance from Arbor Bay.

To get to Renk's Laboratory, start in Rata Sum and head south through the Magus Stones. You should not encounter many enemies beyond spiders and weavers. Enter the Alcazia Tangle from there, and continue heading south. If you are good at maneuvering, you can make it to the entrance to Renk's lab without fighting any enemies at all.

Once you reach Renk, you will find him surrounded by a handful of Destroyers. As you approach, you will shout, "By the gods! Hang in there, Renk!". Once this happens, the Destroyers will move in and attack Renk. You can rush in and try to protect Renk, or ignore him; if he dies, he will resurrect without affecting the quest. Once the destroyers are dead, speak to him to complete the quest then map back to Rata Sum to collect the reward.