A Little Help From Above 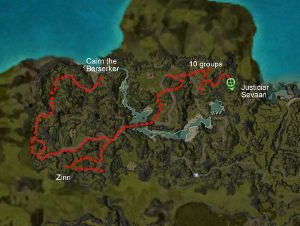 A Little Help from Above mission map

Rumors among the residents of Shaemoor suggest that the White Mantle are now sheltering one of their Unseen demons inside the town walls. Our agents have concluded this is most likely the laughably named Aily the Innocent. We must continue chipping away at the White Mantle's leadership. The Mursaat are few in number, and each one we slay is a great blow to our enemies. But this is not a task for the light of heart, as the Mursaat will be heavily guarded. If you choose to undertake this challenge, make haste for Divinity Coast via the Secret River Passage in Talmark Wilderness, and be sure to check in with Livia at the lab. She has been gathering intelligence on White Mantle forces in the area and can help you plan your assault. This is your mission; do you accept it?

Accept: "For Kryta, this Mursaat will fall!"
Reject: "That lab makes me nervous. Perhaps someone else would be better suited to this task."
When asked about quest: "Make for Divinity Coast via the Secret River Passage in Talmark Wilderness, and speak with Livia once you arrive in the lab."

"Greetings. I hope you are prepared for what is ahead, this task will not be easy. The Mursaat, Aily the Innocent, is hiding behind a locked gate at the entrance to the Fountain of Truth, in the hills above Shaemoor. The reinforced door is only opened with a key that is held by a particularly fierce Jade Construct called Cairn the Berserker who is currently spreading terror in Loamhurst. I've asked Zinn to whip up a little something that will help you penetrate the forces guarding Shaemoor, but he demands more time. Go kill Cairn the Berserker, get the key, and come back for Zinn's weapon. It should be ready by then."

"Yes yes, don't pester me! Okay, I'm done. I had to do a bit of a rush job, but it should suit your needs just fine. Here's how it works...I'll speak slowly and use small words so you might understand me. Take this beacon with you, and when you are in need of some extra firepower, simply drop the beacon on the ground. That marks the spot for the golem bombardment. Fear not the falling golems; I've calibrated them to harm only your enemies. I can give you one for now, but return here once you've used it, and I will deliver you another beacon."

"There you go. Use it wisely."

"We could see the smoke from Shaemoor all the way over here! Clearly, Livia was correct about Zinn and Blimm's abilities, though I hope those Asura didn't cause too much collateral damage in the process. Thank you, my friend. The death of Aily the Innocent is a serious blow to our sworn enemies, and another step toward recovery for our people."

Temple of the Intolerable

To get to the Divinity Coast explorable area, leave from the Temple of the Ages and travel to the Secret River Passage in Talmark Wilderness. Once there, find and speak to Livia, who explains that you must obtain a gate key by defeating Cairn the Berserker in Loamhurst. Leave the lab area and take the road to the west and north (following the main mission path) to reach Loamhurst, fighting through the legions of Peacekeepers on the way.

After defeating Cairn, you'd think that you'll have an easy walk back to the lab, but watch out — the road is now packed with hidden White Mantle. Sending one player or hero ahead of the party to spring the ambushes can be quite helpful.

While it is not necessary to speak to Zinn at this point, the "weapons" he has devised can come in quite handy. He will give you an Asuran Beacon, which you might recognize from the G.O.L.E.M. quest. However, instead of summoning a single G.O.L.E.M., Zinn's beacon will summon a trio of Fire Bit Golems that explode on impact. The beacons can only be used once, but each player in the party can carry one. You can also obtain additional beacons by speaking to Zinn again, although this is usually impractical because Zinn doesn't follow you.

Whether you pick up Zinn's beacons or not, head east (backtracking the mission path) until you reach Shaemoor. Be sure to clear all enemies in the area outside the gate, because some of them patrol quite close to the gate and can catch you unawares while fighting the enemies inside. Once you kill the Shaemoor Gate Guards, the gate will open, and a couple groups of White Mantle will move to engage you at the gate. The groups inside the village are very closely packed, and it is easy to over-aggro at this point.

In all, you must defeat 10 groups of Mantle in the village, including Justiciar Sevaan's group at the top of the hill (where Justiciar Hablion meets you during the mission). Usually, defeating a group will cause another group to come charging through the eastern gate, so wait a few seconds before engaging the next group. After the village is clear, use the Lever to open the gate to the Fountain of Truth, where you can finally engage Aily the Innocent along with a few of Jade constructs. Killing Aily will complete the quest and cause the Jade to self-destruct.