Scholar Chago in The Astralarium

"Ahai! You seem rather strong and capable. Would you be willing to do a favor for a weary old scholar? I've been conducting research on the Scarab Plague, a devastating malady that wiped out nearly the entire population of Istan some six hundred years ago. There is very little information on the plague, unfortunately, so it's been difficult to figure out exactly what it was or how it can be prevented from striking again. The ruins around Fahranur may still contain remnants from those days. They are abandoned so you shouldn't find any trouble there."

Accept: "Oh boy, I love plagues!"
Reject: "I feel a cold coming on already... no thanks."
When asked about quest: "Please go to Fahranur and search the ruins for any clues to the nature of the Scarab Plague. Once you've found some useful information, come back and let me know what you've discovered." 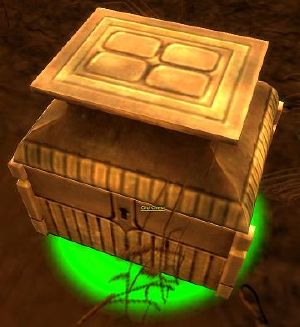 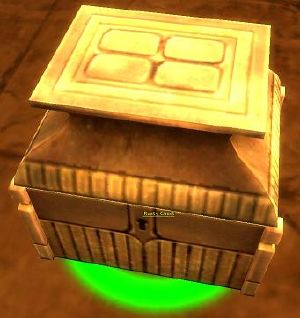 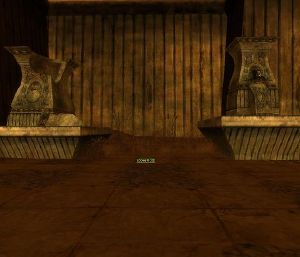 "These bones have been damaged by the passage of time, but still bear signs of the disease that killed their previous owner. There are spherical indentations and cracks on the surface; something hard and round grew against them and bent them out of shape. The skeleton is curled in a fetal position, as if the person was in significant pain."

"Strewn across the ground near these bones are the remains of some sort of small eggs or cocoons."

"After struggling with the chest's lid for a few minutes, you finally pry it open and discover a few tattered scraps of paper within. These are the remains of a journal! You can still make out the writing, which paints a very disturbing picture of a city ravaged by plague. Apparently, it struck without warning and spread like wildfire."

"You snap the rusted lock off the chest and find a dusty journal within. The last written page reads:

This plague is tearing the city apart. It seems to strike without any sort of logic... young and old alike are devastated by its effects. Those who still survive burn down entire buildings in hopes of cleansing the plague's dire corruption, but it seems hopeless. Word has reached me of a terrible new stage of this plague, and people are claiming that bugs escape from within the boils. I hope that these are only delusions brought on by the plague's effects, but I am beginning to wonder if it could be true...."

"You move the loose rock and push away some of the dirt to find a hastily scribbled note. It reads:

I leave this note in hopes that it will survive the destruction of our land. By the time you read this, my friend, I will have fled the city. The danger here is too great. I hope your ship arrived before the chaos here closed the port. I will bring your wife and son with me to the old farm where we grew up in Zehlon Reach. Fear not, they will be safe there. Whatever you do, my friend, do not eat or drink while in the city... I fear the plague is spreading through the food.
I hope to see you soon.
- Yomindhe"

"Hmmm. Most interesting... what you have found confirms my suspicions. The few written records I have are so crazed that most thought them to be wholly inaccurate, but it seems now that the stories of bugs bursting from within people's skin may actually be true. If you are still willing, you may be able to assist me further in my research...."

Enter Fahranur, The First City through Jokanur Diggings. You may need to take a few steps forward before the quest updates, but once it does, simply follow the quest marker to all the points of interest, clicking on the items to read their clues to the plague. Then travel back to Chago to collect your reward and the next quest.