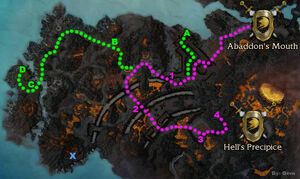 Open the Door of Komalie.

Once you begin the mission, head west (follow the purple path, see map above) until Vizier Khilbron pops up. He will tell you to hurry and help you by casting Chimera of Intensity and Quickening Zephyr. Chimera of Intensity is a very powerful enchantment that lasts two minutes, gives you essentially unlimited energy, and cuts skill recharge time by half.

Clear the group of Jade Armors and an Ether Seal to open the way to the fort. There are several groups of mobs inside, including some that wander. If you run through the door and then up a hill into the corner south of the door (and flag henchmen and heroes so that they come, too), few mobs will follow you immediately. A couple additional roaming groups will wander over to you and attack, but they take long enough that you should never have to fight more than five mobs at a time. Chimera of Intensity is a powerful enough buff to make this fight quite easy.

After breaching the fort, clear mobs as normal and head to the west along the purple path. The next major set of fortifications has two Mursaat or Jade bosses guarding a door. Up above the door are two ether seals, each guarded by three Jade Bows. Some additional mobs wander the area. In most cases, it is easiest to clear one group at a time, and clear most other mobs before taking on the bosses.

Another alternative is to simply skip the bosses. The only creatures that must be destroyed in order to open the gate are the two Ether Seals. Once they're dead, the gate opens, and you can just run straight past the bosses. They are firmly anchored to the gate and will not follow you very far past it; you're safe by the time you reach the location of the Mursaat monk. (This strategy obviously assumes that you have no other reason to want to kill the bosses, such as skill captures or doing the bonus.)

Now the gate is open, so go through it. There will be two groups of Jade Armors and a Mursaat Monk here. As soon as you get near the Monk, it will run for the Jade. Follow the path: you will get to a group of Jade Armors guarding another seal. Behind that seal (point 2), you will find two bosses. Lure them, as a few other groups are behind them.

If having trouble pulling the next pair of bosses, you can run past them to the south. The bosses will not chase very far, and this allows you to pull and kill the other mobs by themselves. After this, you can easily take on the two bosses alone or skip them entirely.

Next, you will reach another seal, guarded by Jade Bows on the wall. Ignore the Jade, kill the ether seal, and pass through. Next comes the final two bosses that you haven't yet faced, followed by another ether seal. As before, if having trouble killing the bosses, you can kill the ether seal and run.

After going through this seal, you are all set for the final battle. The Vizier will appear to tell you what to do: you will have to destroy the six seals that lock the Door of Komalie. Each time you break a seal, a group of four Seal Guards will come out from the seal; they are worthless and basically tickle your party members. Starting about 30 seconds later, three Mursaat Guardians will come one-by-one alternating from the north and south edges of the map.

Destroy only 1-2 seals at a time. After breaking the seals, wait for all three Mursaat coming from the north and south, and take them out. Only then should you progress to the next set of seals. Once you break all six seals, you will see a cut-scene and then you will need to fight one Titan, which is surprisingly easy. Once that is done, another cut-scene will be shown and the mission will be complete.

Because the cut-scene plays immediately after the final seal is broken and all enemies on the map disappear, a party with sufficient firepower can spike each seal quickly (requiring only a healer or two to hold off the pressure from the advancing guardians). Do not attempt this without a confident team and suitable build.

The bonus in this mission is to free the Ghost of Leah Stone and then escort her to an island that on which she wants to reside.

The bonus follows the green path on the map. Leah is at point A. Take out every monster on your way to that point except the last seal, which is by the docked boats. This seal is holding Leah. Leave it for now and follow the green path, clearing out any monsters that might come close to this path. Most notably:

After you clear the way, go back and break the seal at point A and speak to Leah. She will follow a set path. Further, she wanders in an inefficient route that forces you to clear more mobs, so clear all of the mobs from the area so that Leah will be safe.

Leah will attack any mobs that she sees, and can get herself killed this way. As such, it is advisable to clear all mobs from her path before starting the bonus, so that she won't find any mobs to attack. If you accidentally start the bonus before opening the gate, try to kill the Mursaat Monk before it reaches the Jade Armors. If you do, run past them without attacking them and clear the rest of the path since they are disabled. Leah will be distracted by them, giving you more than enough time to clear the rest of the path. When she gets to point D, she will thank you and you will complete the bonus.

Note: If you're really unlucky, an aberrant chest will spawn in Leah's path and will prevent her from proceeding forward. The only way to obtain the bonus is to restart. Her route tends to be straight lines from one corner to the next to minimize her distance traveled while running, so her route is fairly predictable to see if she's going to get caught on a chest.

Breaching the fort by having the whole party run into the south corner as soon as the ether seal is killed still works, but the party really does have to go into the corner. You'll have to flag henchmen and heroes, and get players to all go all the way into the corner. Standing in the doorway or making a couple token steps toward the corner before stopping on the ramp will draw two or three additional groups of mobs and quite possibly get you wiped. If grouping with players who aren't terribly bright about tactics, you may have better luck pulling one group at a time out the doorway to kill it, though this wastes the powerful Chimera of Intensity enchantment.

There are at five groups of mobs that patrol the area around the lava pit on the bonus route. If you're doing the bonus, carefully pull and kill one group at a time. Rushing in will get you wiped.

The second pair of bosses are most easily attacked from the south. There is another gate further south (between point 2 and point X) that you can enter through, which makes it easy to pull and kill the Mursaat behind the bosses without bringing the bosses, too. The south gate sometimes glitches and will not open when you kill the ether seal if there are dryders inside the gate. Let the ether seal kill the dryders and then wait a bit before breaking the seal to avoid this.

Don't rush into the six ether seals at the end, as they're powerful enough to kill you in hard mode, even with Chimera of Intensity. Rather, kill two ether seals without coming into range of the others and wait until you've killed all six of the Mursaat Guardians that come before killing any more seals. The Seal Guards do minimal damage even in hard mode, so they're the lowest priority target if there are other mobs attacking you.

Vizier Khilbron: Our allies await, but the Onyx Gate guards the main passageway into Abaddon's Mouth. I will cast an enchantment to help you break through their defenses, but its effects will not last long. Make haste through the Onyx Gate. I will meet you on the other side.

Leah Stone: Thank you for freeing me. I was killed on one of the Bloodstones by the White Mantle, and my spirit has been trapped for quite some time. But alas, all this dark magic is draining my soul's energy, and I do not wish my final resting place to be here. There is a small island to the west that reminds me of the fields of Loamhurst. If you take me there, I can at last be at peace and away from the pull of this vile place.

Leah Stone: My soul is free. Thank you. I can finally be at peace.

Vizier Khilbron: The Mursaat know you are the ones to fullfill the Flameseeker Prophecies. They will do anything in their power to keep you from reaching the caldera.

Vizier Khilbron: At last the Door of Komalie! Those seals hold back our allies. Break them open and bring this fight to an end.

Lich Lord: Yield to the Scepter of Orr. I command you. It worked. Just as the prophecy said. It worked!

Lich Lord: To Lion's Arch. To Thunderhead Keep. And you. You will go to Rin. Destroy them. Tyria will be mine. All mine.