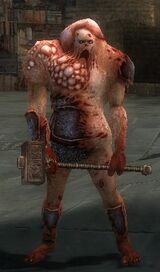 An Afflicted Warrior, a typical Afflicted.

The Afflicted are cursed creatures that plague the land of Cantha. They are living creatures — animals, humans, plants — that have gotten too close to the malevolent spirit of Shiro Tagachi. Despite rumors to the contrary, the disease is not contagious, and only spreads through contact with Shiro.

Afflicted look like a grotesque misshapen pile of human organs (and body parts of other creatures) shambling about. Some are more human-shaped than others. Most of them appear to have large, swollen tumors on their bodies. They retain the combat strengths of their former selves, but their powers are altered and augmented in terrible ways by the Affliction. Upon death they explode in a putrid manner causing high damage in an effect called Afflicted Soul Explosion.

The Afflicted can be found throughout Cantha, on Shing Jea Island, in the narrow alleys of Kaineng City and even making assaults in the Echovald Forest and the Jade Sea. In any area they are found, they will be hostile to all other creatures except Shiro'ken and (usually) the Am Fah.