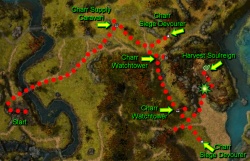 Automatically added upon completing Search for the Ebon Vanguard
After first completion, can be obtained from:

Search for the Ebon Vanguard

The Dawn of Rebellion

Leave Longeye's Ledge and head southeast to find a battlefield crawling with Carrion Feeders and Stonewolves, with a lone Vanguard Helmet in the middle. Speak to the helmet to initiate the quest.

All you have to do is fight your way to the Charr camp, storm it, and defeat Harvest Soulreign; everything else is optional. However, completing the optional objectives will reduce the number of Charr in the camp, cutting the garrison by half if you complete all five objectives. All of the optional objectives involve blowing stuff up, which can be quite rewarding in itself.

During this quest, you will encounter Charr Firereigners in many of the enemy groups, who each drop a Charr Explosive when they die. These are required to complete the optional objectives and can also be used against the Charr themselves, much like Dwarven Powder Kegs.

The easiest path to the camp is to run south from the starting point and cross the southern bridge, then follow the southern edge of the area until you come to the large river. Avoid the Charr around the Siege Devourer as you head north to the garrison. Harvest Soulreign is in the rear of the camp accompanied by Gordam Griefgiver, but only Harvest needs to be killed to complete the quest. When he dies, a cutscene will play, after which the party will reappear in the now-empty Charr camp with Pyre Fierceshot as an ally, talk to him to get The Dawn of Rebellion, leading you to Doomlore Shrine.

Intercept the Charr Supply Caravan: The caravan is the northwestern red icon on your mission map (U). Simply drop a Charr Explosive near any one of the supply carts to destroy the entire caravan. The nearby Ammo Cart will supply you with unlimited Charr Explosives.

Destroy the Watchtowers with Explosives: The other two red icons are the watchtowers. Drop a Charr Explosive next to each of them to burn them down.

Employ the siege devourers to fire explosive charges at the garrison: The Siege Devourers are at the two star icons on the map. While carrying a Charr Explosive, speak to the devourer to load the charge. After lobbing the charge at the garrison, a return volley will take out the devourer.

Hard mode makes the Charr a lot stronger, but doesn't change the basic tactics. The strongest enemy group is the group of six that will charge your position at the start of the mission. They can be avoided by looping clockwise around the large stone formation just west of your starting location, and then you can proceed with the mission as normal.