All Alone in the Darkness 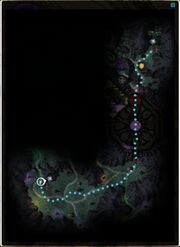 The fastest way to Ahtok. Only 5 patrols need to be fought. 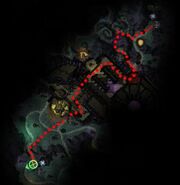 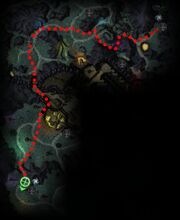 Keeper Halyssi in Gate of Secrets

"While I do not know where the temple lies, I have noticed increased Margonite activity within the Domain of Secrets recently. It may be nothing or it may be Abaddon marshaling forces at the temple. I told all of this to that other Sunspear scout who came through here before you. He rushed off on his own to search for the temple. I tried to stop him, but he seemed... determined. Perhaps you should go find him. The Domain of Secrets is where Abaddon keeps his darkest and most terrible secrets, which no man should behold alone. I fear he may already be lost."

Accept: "We´ll find him."
Reject: "We need more backup first."
When asked about quest: "Your Sunspear scout went into the Domain of Secrets in search of the temple. You should find him before Abaddon's forces do.

"<name>, we should hurry. This place is everything the keeper said it was... horrible beyond belief. And he was right about the increased activity. Something big is happening here. What was that scout thinking? A lone Sunspear wouldn't last long here. We must find him as soon as possible. Then we can all look for the temple together."

Scout Ahtok: "Whew! That was close."

"<name>! Kormir! Am I glad to see you! You got here just in the nick of time, it seems. Keeper Halyssi sent you? Thank the gods. I followed a Margonite patrol right to the entrance of that lost temple he mentioned, but I got pinned down and couldn't find a safe route out. The temple is heavily guarded. From what I can tell, Abaddon's generals have gathered a large portion of their forces there for some uncertain purpose. If we wish to enter the temple, we'll have a hard fight ahead of us."

Player response: "It's all or nothing!"

"Are you ready to move on? This could get dangerous."

Kormir: "Report, my friend!"
Tormented Soul: "It is an old temple of the Six Gods."
<party leader>: "Six gods - from a time before Abaddon's fall."
Kormir: "Indeed. Once this temple stood on the shores of the Crystal Sea."
Kormir: "But the Margonites so loved Abaddon, that they defaced the statues of the other gods."
Tormented Soul: "And when Abaddon fell, he pulled it down into Torment. It is now overrun by his Margonite worshipers."
Kormir: "You have done well, spirit! Join your fellows in the Mists."
Tormented Soul: "Thank you. May the gods stop Abaddon's madness!"
<party leader>: "Kormir? Are you all right?"
Kormir: "No. We teeter on the edge of chaos, and it is my fault."
<party leader>: "It is not your fault. Abaddon has worked for centuries to free himself."
Kormir: "Very well. My responsibility. Let us pray the gods will aid us."

"The temple you seek can be found here, but entering it will not be easy."

The hardest part of this quest is navigating through the ruins of the Domain of Secrets while avoiding the many large groups of level 24 Margonites that populate the area. These groups are not difficult to take down even with a full party of henchmen, provided that you can take it one group at a time. Getting trapped between multiple groups of Margonites is a sure way to rack up DP. Thus, the best strategy would be to carefully progress through the route while keeping a close eye on nearby mobs. Don't take a chance until you're sure they won't get too close while you take out the single group blocking your path.

Be sure and take the Margonite Hunt from the Forgotten Warden at the beginning of the quest - it will double the XP value of Margonites, which will help reduce any DP if you've made a mistake.

Near the end, there are small groups of Titans that should be avoided: when killed, they decompose into several smaller titans and can quickly overwhelm a party with their powerful AoE skills. They appear easy targets because there are only two to a group, but it's a lot easier to just wait for them to pass.

When Ahtok is finally located, you will need to rescue him from a group of Margonites who run up to him and start attacking. This group is like the others and not difficult since Ahtok will also be helping in the battle. If Ahtok dies, the player will be required to restart the quest from the very start. Once this battle is over, talk to him to progress to a cutscene and the Gate of Madness.

Note: Do NOT go into the portal next to Ahtok, doing so will take you into the Gate of Madness outpost, but you will have to repeat the quest (since you need to speak to Ahtok to trigger the cutscene which will take the party there).