An alliance is a group of guilds that form a cartel (or confederation) to work together towards a common goal that may be difficult for a single guild to achieve. Alliances take the name of the founding guild, and the leader of that guild is also the leader of the alliance. No more than ten guilds can be in an alliance. Alliances can help each other gain faction points based on the actions of their members; they also represent an even larger group of familiar players with whom you can go adventuring. In Factions, alliances are aligned with either the Luxons or the Kurzicks and the most common reason for forming alliances is to faction farm on either side to compete for town control (see below). 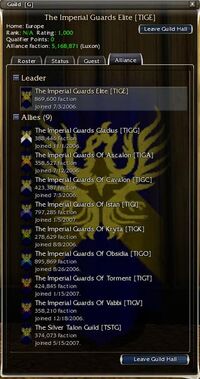 Guild Wars: Factions does not require a player to join an alliance of guilds (as referenced in this article) in order to choose sides in the Kurzick/Luxon war. A player may choose either side and complete all of the related quests and missions, with the exception of Alliance Battles, set in those areas. Joining an alliance of guilds only becomes mandatory if you want to participate in Alliance Battles for control of towns.