Alliance Battles (abbreviated as AB) are 12 vs 12 PvP battles that control the Kurzick-Luxon border. Kurzicks wear their traditional blue color and appear as blue dots on the map while Luxons wear their traditional red color and appear as red dots on the map. Alliance Battles were introduced in the Guild Wars Factions campaign. They are only available to players who have Factions registered in their Guild Wars account.

There are five alliance battle maps. The battlefield map is determined by the location of the border between the two warring nations. The more territory one nation has, the "harder" the map will be for that nation.

There are five battlefield maps determined by the current location of the Kurzick-Luxon border. Players cannot choose which map to fight in. Maps deeper in one faction's territory give greater advantages to that team. To compensate for this, the opposing team has an "Underdog" bonus multiplier for their rewarded faction at the end of a match. When the border shifts, all players in the staging area are automatically moved to the new map. If the border has shifted while the player is in battle, they will be transported to the new map once their battle has ended.

You assemble your group of 4. The party leader will press the "Enter Battle" button and your party will be sent into the alliance battle, provided there are twelve individuals (three teams of 4 people) on the other side waiting to enter as well. The game will keep resetting the 30 second timer until there is a full team ready on each side.

Team Chat in the chat window allows players to chat with all of their allies. Chatting players from another 4-player group will have their names in darker blue, and an (Ally) suffix. You cannot chat with only your team in alliance battles. Drawing on the map will only be seen by your team of 4, and no one else.

To win a battle the winning side has to accumulate 500 points before the other side. Accumulating points can be done in two ways:

A faction may be given an automatic victory under the following circumstances: 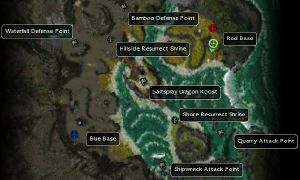 A team attempting to capture a control point will bring in a number of players to it:

Once captured, a control point will spawn a few NPC guards (which count towards holding the control point) and offer some other special abilities (resurrecting allies closer to the battle, increasing characters speed, elemental protection, creating NPCs that follow players around). If the NPCs are killed, they will not respawn unless the control point is lost and recaptured. The saltspray dragon hatchling is an exception and will respawn.