The Countess of Hakewood in Lion's Arch

"The time draws near. Can you feel it? The seals that divide this world from our realm grow weaker. We must press on! And "we" still means "you." I have located our final target: the Ingenious Ettins, which can be found on Perdition Rock."
"Ages ago, when King Thorn still ruled Kryta, the ettins sought to overthrow him. They hatched a plan, a cunning one, I will admit, to dispose of our most exalted liege by means of a rock. A rock bigger and more improbably than even your wildest imaginings can fathom. DON'T TRY! In response, King Thorn found those responsible, the smartest of the ettins, and banished them to Perdition Rock. And there they have remained, biding their time and plotting their revenge. If our king is to return to this world, this ettin threat must be extinguished. They must not be allowed to prevent his coming!"

Accept: "I'll teach those ettins a thing or two."
Reject: "Ingenious Ettins? The prospect alone is too terrifying for me!"

"The ettins are gone? Yes, yes, it is well and good. Their cunning would have proved problematic for us in the long run. I sense we have weakened the seals... but is it enough? Perhaps our work is not yet done. But another day, another time. Our next visit should be our last. We will break the last of the seals, and King Thorn will once again rule these lands! I will give you this reward for your assistance. And this piece of knowledge: practice laughing now, little one. Your life may depend on it." 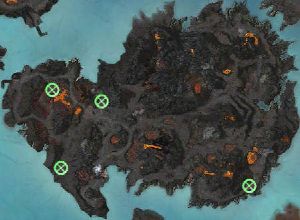 The Ingenious Ettins spawn at the same points as the normal hydra and ettin bosses on Perdition Rock (see map at right), with 2 of them spawning at the southwestern point. They spawn in addition to the normal group of ettins and hydras at that point, which may include a boss.

Be careful of over-aggro, especially at the very beginning where multiple groups of Mahgo Hydras and Flesh Golems patrol in overlapping paths. If you are familiar with Perdition Rock, then this quest should present no special difficulties.