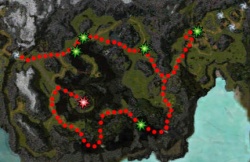 Zunraa in Seitung Harbor
Note: Zunraa may simply be labeled "Kirin". You may have to summon him by ringing the bell at the Shrine of Zunraa in the southeast corner of Seitung Harbor.

"My energies are exhausted from the effort of protecting Zen Daijun from this sickness. My weakness has allowed a dark spirit to enter the valley; it feeds on the miasma and grows stronger even as my power wanes."

"This demon is not the cause of the sickness, it is merely an opportunist. But each day it remains here, the imbalance in my valley increases; the scales that keep good and evil in check will be tipped, and... "

"No! I will not stand by while my valley is defiled! "

"Help me cleanse the valley of this plague so that I may reclaim my power and return this precious valley to its former state. We must retake Zen Daijun! "

"We have done it. We have retaken Zen Daijun. Thank you for helping me to rid this sacred valley of evil and disease. Blessings be upon you always."

This quest is available only to Factions characters. This prevents such characters from gaining an excess of attribute points.

Enter the quest area by talking to the gate guard at Seitung Harbor.

Instead of Seitung Harbor you may take this quest from Zunraa in the Zen Daijun, too (after summoning it by ringing a bell at a Shrine of Zunraa), but if you do so the quest may not update properly. If this happens, exit and re-enter the zone. Zunraa will appear right with you at the start and from there on follow you as an ally.

Follow the dotted line on the map to each of the miasma clouds (green stars on the map). Make sure to lead Zunraa thoroughly through each cloud until every last trace of it is gone. The quest will update several times with most miasma clouds. Zunraa casts a spell which removes miasma effects whenever you use a skill, so he's useful to have around.

If Zunraa dies during battle, resurrect him at one of the many shrines placed along the paths. Just ring the bell and he appears. Note you may have to clear out enemies guarding these shrines, so it's a good idea to clear them out as you go along to save backtracking.

The path makes a loop around the map. You can go in either direction. To avoid some large groups of enemies, you can go halfway around, then go back the other way -- making two arcs instead of one big loop.

Finally, the Corrupted Zunraa will appear inside the Daijun Library, after you clear it from miasma (red star on the map). It does not bring any allies, but it's level 19 and a potent Smiting Monk boss on its own.

The Corrupted Zunraa (final boss) appears as soon as last miasma cloud is gone. If you leave the last miasma until the library where he spawns, you might be fighting with miasma effects. Let just one player lead Zunraa to clear the last miasma. Alternatively, clear out the library at the beginning, then clear the miasma everywhere else. Then the corrupted Zunraa will spawn alone in the library and you will have no miasma to worry about. This is the best solution if you should find it necessary to use a lot of henchmen. Zunraa seems to occasionally tank this boss. Even if he dies during the fight with The Corrupted Zunraa you can still return to Seitung Harbor and receive your reward from the Zunraa in town.

To receive reward, simply talk to Zunraa after the final boss is dead.

Leaving the Zen Daijun area at any time during the quest will cause you to restart from the beginning.

If you're doing this with only henchmen keep in mind that they don't seem to get that they are spreading the miasma by running to you. Just don't try running away from them because it will only make them spread miasma until everyone is dead. Instead, just stand still and wait for the miasma to disappear and you will have no problems.

Also, if you flag the henchmen outside the miasma, they will stand there safe while you lead Zunraa through it.