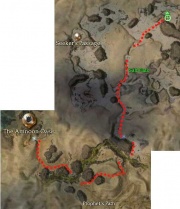 Path from The Amnoon Oasis

"I have heard that out in the Salt Flats Elonian ghosts sometimes reveal themselves. One in particular, Sennat Sen, is said to have worked as the master artisan for Turai Ossa of Elona. This ghost has never appeared for me, though I have searched for him many times, so anxious am I to learn more of the secrets of this ancient people. If, in your journeys, you should meet this Sennat Sen, please convey to him my respect for his people and tell him that I too hope to speak with him some day."

Accept: "I'll keep an eye out for him."
Reject: "Perhaps this ghost doesn't want to be found."

"Fangfa Tai is a particularly short-sighted mortal. He has walked by me on several occasions. Though I have sought to manifest before him, he has seen nothing. Such is the way with some people it seems. Why should I hide? What is more tedious than an eternity in the desert alone, after all?

Did you know, there was a time I would have given my life to protect the secrets of my trade? Now that my life is over, it seems not so important. Is there something I can craft for you?"

If you are doing this quest standalone, it may be best to begin from Elona Reach. Follow the wall on your left all the way round until you come to the portal to Salt Flats. Now just head right to a teleporter which will take you across the small valley to the quest objective.

You need to take it slowly. You will encounter Devourers, Jade Scarabs, and a pretty large number of Storm Kin. The Storm Kin patrol in small groups but can move very quickly along their patrol routes, so it is easy to aggro more than you would like. So be careful to deal with these in as small numbers at a time as possible, and heal up and recharge between encounters.

Tip: If you do not feel like fiddling with the teleport switches, you can enter the small valley and exit via the ridge that is just left of the teleport on the opposite side of the valley. The same ridge can be used to make a quick escape if you start to become overwelmed with attackers.

An alternative if you do not have access to Elona Reach is to begin the quest from Seeker's Passage, going north-east and then east (if lost, the second map provided may be of assistance, it shows the location of this outpost in relation to the quest's objective).