The Ancient Weapon is a mysterious bundle that spawns in the northwest corner of the Arid Sea, inside the city guarded by the Enchanted. Specifically, in an alley east of the main square, a little north of the bleached bones. It does not spawn until the player approaches the location.

The item appears to be remarkably similar to the Ark of the Covenant (the orange is supposed to be a glowing gold like color) and has a column of flame softly emanating from the main body (see the glow in the pic).

Yannel Brunn speaks of weapons strong enough to destroy his civilization, but the Ancient Weapon does not seem to interest him. It is also of no interest to the Forgotten Guardian. It disappears if carried out of the zone.

Linsey Murdock, an ArenaNet staff member, has clarified that its purpose was originally to knock over the large hero statue in Arid Sea so that it would fall on the large stonemass on which the Forgotten NPC you need to reach during the 15-attribute point quest is positioned. However, this never made it into the game, and as of now, the weapon has no purpose, though a wandering Ritualist might find it useful as an unlimited duration bundle. 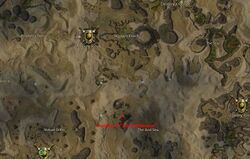 This screen shows the location of the ancient weapon.