And a Hero Shall Lead Them 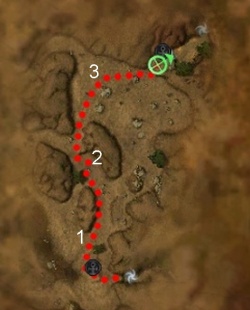 The Great Escape
Koss must be in your party

"We need to evacuate the wounded, but we'll never make it to the coast with everyone in the country against us. However, it seems not all Kournans are happy with Varesh. If we can win over more of the populace, it will make the evacuation that much easier. The local priests may be able to help us with that.

But, to make all of this work, we'll need a new leader...and I think it should be you! Of course, you'll have to be able to command the respect of all Sunspears. Therefore you must first achieve the rank of Sunspear General or be one of the distinguished leaders Kormir herself recruited from foreign lands. When you are ready, Koss will update you on the evacuation plans."

Accept: "I am honored by your confidence in me!"
Reject: "I'm not worthy."
When asked about quest: "If you want to lead the Sunspear evacuation, you must first attain the rank of Sunspear General unless you are one of the distinguished leaders Kormir recruited from foreign lands. The local priests have much sway with the populace. Speak with them to see how we can win over the hearts and minds of the Kournan people. Then, have Koss update you on the evacuation plans."

"While I was at the garrison, I overheard talk of the captured Sunspears to the north of Nundu Bay. Rojis will meet us in the Venta Cemetery to assist with the evacuation. We must proceed with caution, however: the guards use sentry traps to keep wild creatures from wandering into their perimeter.

We must rescue as many Sunspears as we can and evacuate them before Margrid ups her fare."

Koss: "Nerashi warned me about those spotters. They will alert the archers to fire on us with longbows if we're not careful."

Koss: "There are sently traps just ahead. We'll have to tread lightly around them."

Koss: "Looks like we have to deal with both to get these guys free."

"Ahai! It is good to see you survived! Rojis made it out of Gandara as well, hanging onto a barrel! He figured out a way to disarm those blasted traps the Kournans have been using as well. Brilliant mind, that Sunspear."

Player response: "What's the status of the evacuation?"

"It's not looking good. There are Kournan troops everywhere, and we need to evacuate our people immediately. Let me know when you and Koss are ready to muster the troops. Then Rojis can tell you how to disarm those traps."

Koss: "Okay, listen up!"
Koss: "We lost the fleet at the Battle of Gandara, but we're not stuck here."
Koss: "I've arranged passage back to Istan."
Koss: "There's one hitch. There's a Kournan garrison between us and the ship that'll take us home."
<troops>: <groan>
Koss: "Maybe you'd better explain the plan."
<party leader>: "We're going to lead you to the ships, but we're going to have to move quickly."
<party leader>: "The longer we're out in the open, the more likely the Kournans will come down on us."
Koss: "Most of you are in no shape to fight. Just stick close, and we'll get you home safe."
Koss: "Be sure to check with Rojis about the sentry traps. Other than that, we're ready to go."

"Good to see you, my friend! And to think you've got all your arms and legs intact after all you've been through!

As a matter of fact, I have managed to figure out a way to disarm those pesky sentry traps. I'll show you how once we're on our way. That corsair, Margrid, is waiting on the other side of the garrison. I'll stay behind and direct any stragglers. Take this, you'll need it."

If Elonian-born, get promoted to Sunspear General (2,500 Sunspear Promotion Points), then head into Sunward Marches and start rescuing captured Sunspears. Do remember that Kournan Spotters have a much larger aggro range.