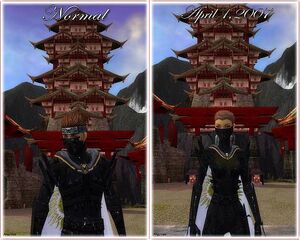 Example of the "gender switch"

On April 1st 2007, all player characters in Kamadan, Lion's Arch and Shing Jea Monastery were gender reversed. The characters' corresponding armor pieces were also switched to their opposite gender counterparts. As soon as the player left one of these areas, the character returned to normal.

The same gender reversal can still be seen while previewing an Extreme Makeover from Anatomical Engineer Llye. The character preview that appears after checking the Extreme Makeover box without any other modifications will have the same appearance as it would have had during this event.