Arachni's Haunt is a 2-level dungeon. The quest Scrambled Reinforcements is required to progress beyond the first floor to defeat Arachni.

Go southwest from Rata Sum through Magus Stones. The entrance to the Haunt is in the southwest corner. 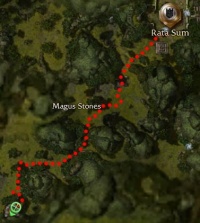 When you first arrive, the dungeon appears scarcely populated with enemies. Do not be fooled. As you attack the visible enemies, groups of Ooze will spawn, including Earthbound Ooze. The Ooze can replicate themselves using Ooze Division, increasing their numbers rapidly. They will quickly overwhelm the unprepared using AoE damage. Stay spread out and pull carefully; try not to pick off too many groups of ooze at once.

As you proceed past the poison dart room, several huge balls of fire will start rolling towards you, one at a time. Although death-by-fireball does not cause Death Penalty, they can take out key party members during combat resulting in a wipe. (Plus, it is more than a little embarrassing.) Lok the Mischievous also tosses fireballs, but these are more easily avoided. Lok himself can be easily defeated with ranged attack, because he refuses to move far from his original location.

To spawn the spider bosses that carry the dungeon keys, you have to use an Asura Flame Staff to ignite 5 different spider eggs on each level. Each time you burn an egg, a large group of spiders will spawn, with the final group including a Spider Matriarch allowing you passage to the next area. Light the eggs one at a time in order to avoid being overwhelmed by the spawns.

At various stages, your way will be blocked by a spider web. These, too, can be burned by the staff, although it often pays to wait so that you can attack any foes on the other side at ranged or caster distance. Leaving the web up also forces the spiders to group together making them easy targets for AoE skills.

In the final room, you will find another set of eggs to burn in order to get Arachni herself to spawn. She can be defeated using the same tactics that worked elsewhere or hiding behind rock columns and using ranged spells that do not require a line-of-sight. Spiteful Spirit and Pain Inverter work well to counter her attacks, although some parties like to use interrupts. 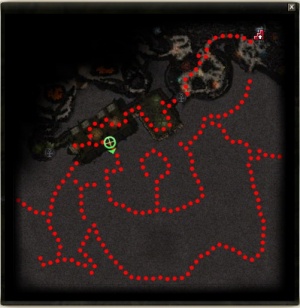 Map of the previous secret area showing the entrance.

When opened, Arachni's Spoils spawns 1 item for each player (2 in Hard Mode).