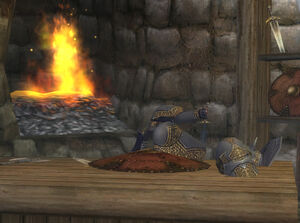 Armor crafters can be found in most towns, many outposts and a few explorable areas and mission locations. They are easily recognized by the "[Armor]" suffix in their names. Armor crafters for Ascended or prestige armor in Guild Wars Nightfall are suffixed with "[Armorer]" instead.

per armor piece. The 1

armor has the maximum armor rating, and comes with an empty insignia slot rather than an inherent bonus; requiring additional purchases to get the desired bonuses.

Beyond that normal range of armor, there are also Ascended armor (also known as 15k armor) and Obsidian armor. These are primarily for prestige and bragging rights. In terms of function or stats, these do not differ from the normal range of armor above. They differ only in terms of appearance, usually with more elaborate and outstanding design.

but are considered "15k armor" because of the expense of the materials involved. In the Prophecies Campaign, armor crafters for 15k armor can be found in the outposts of Marhan's Grotto and the Granite Citadel, both located in the Southern Shiverpeaks. For the Factions Campaign, the equivalent armor crafters are found in the explorable area of the Divine Path and the outposts of Leviathan Pits and Vasburg Armory. In the Nightfall Campaign, they are found in the Command Post and the Throne of Secrets explorable areas.

The Nightfall Campaign introduced two additional armor sets, Vabbian Armor and Ancient Armor, with a gold cost between normal armor and 15k armor. Vabbian Armor, which can be crafted in the Kodash Bazaar, costs 5000

. Unfortunately, Vabbian armor (also known as 5k armor) also requires Rubies and Sapphires, which are rare and expensive to obtain. Ancient Armor, or 10k armor, can be obtained from the Bone Palace. These, like the normal range, do not come with any inherent bonuses; insignias need to be acquired and applied separately.

Obsidian armor bears a cost in gold equal to 15k armor. The reason why it is even harder to obtain than 15k armor is due to the crafting materials that it requires, which includes a lot of Ectoplasm and Obsidian Shards. Both of these items are rare, and are either difficult or expensive to obtain. The crafter is found in the Fissure of Woe. As with the 15k armor, the only difference between Obsidian armor and normal armor is in their rather distinguished appearance.