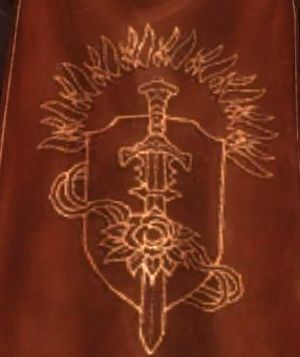 The cape worn by the Ascalon Vanguard.

The Vanguard of Ascalon is an elite force within the Ascalon Army, lead by Prince Rurik and his second in command, Duke Barradin.

While the rest of the Ascalon Army, under command of King Adelbern, concentrates on defending the settlements of Ascalon, the Ascalon Vanguard play a more offensive role. Powered by Prince Rurik's strong will to defeat the Charr, the Ascalon Vanguards try to clear Old Ascalon from the Charr and even push into Charr territory north of the Great Northern Wall. They have established Piken Square as an outpost against the Charr in the Northlands.