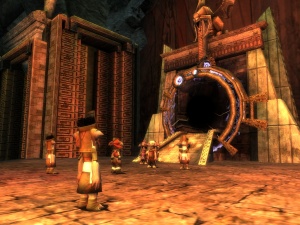 The Asura are a subterranean race which originally dwelt in the Depths of Tyria, but were forced into the Tarnished Coast by the forces of the Great Destroyer. They are diminutive, intelligent, ambitious and arrogant. They have a large subterranean empire, and are magically and technologically adept. They traverse the world through magical portals known as Asura Gates.

The Asura are one of the four factions players help in Guild Wars Eye of the North. They will also be a playable race in Guild Wars 2.

The Asura will be a playable race in Guild Wars 2, although little is known about their post-destroyer society.