This is a mission entry. For information on the mission outpost Aurora Glade, see Aurora Glade (outpost). 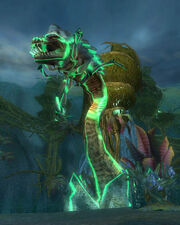 The mission begins with an easy but long run through the jungle. Attune the first pedestal to clear the vines blocking the path (A on the map). To do so, talk with the druid, take a rune crystal from the thorn pedestal next to him and place it on the other thorn pedestal. Fight on until you get to a spot with two pedestals, one on each side (B on the map). To open the way forward, both pedestals need to be attuned with crystals. Doing this starts the White Mantle running to attune the Henge Portal, so make sure you have your tactics discussed first. Attune the Henge Portal by attuning all three pedestals with crystals before the White Mantle succeed in attuning them all. The crystals are located at point C on the map and the pedestals at the three point Ds on the map. If you control all three capture points simultaneously, you trigger the cut scene and advance to the end portion of the mission. If the White Mantle controls all three simultaneously, you fail the mission.

After the pedestals are attuned, a cinematic plays and you are transported into the henge. There you need to kill the Henge Guardian, a level 20 Behemoth and his two Root Behemoths; this should be an fairly easy fight with the Behemoth tending to deal less damage than the two minions. Afterwards, another cutscene plays and you will find yourself at the Henge of Denravi.

A pedestal will respawn a crytal after the one taken is used or dropped. Be aware that switching weapons or using some warping skills will cause you to drop (and hence destroy) your crystal. If in doubt, test them while holding a crystal earlier in the mission.

Perhaps the easiest way to advance past the area is to kill all the White Mantle in the area, so that they can no longer capture any thorn pedestals. Flag your group slightly in front of the northwest capture point, while one player is a runner. If alone with only heroes and henchmen, you're the runner; otherwise, pick one player to be the runner while the rest guard the capture point.

The rest of the group kills the mobs that escort the enemy runner, but should let the runner pass through unharmed, although applying slow skills is desirable. Killing the runner makes another White Mantle become a new runner--and he's often standing right next to the crystal spawn point, reducing the amount of time you have.

The enemy runner has to run perhaps 2-3 times as far as you do, so you have a lot of time, but not an infinite amount of time. Run speed skills can help a bit, but aren't necessary.

Henchmen are plenty strong enough to handle all of the fighting on their own, but not quite smart enough. You may have to reflag them to move lightly armored ones out of Searing Heat (as you'd have to do throughout the mission if it's necessary here). You may also need to flag them ahead and call a target to get them to kill White Mantle Abbots that tend to stay back and heal.

White Mantle do not respawn, so after killing several groups, the runner will eventually come alone. When that happens, kill him and you can attune the crystals at your leisure. If you're doing the bonus, the Demagogue will be all alone at this point, and hence an easy kill.

Rescue the warrior Less Longbow from the White Mantle attacking him (1 on the map). He will tell you of the Demagogue, a powerful member of the Mantle, whom you should kill. If, for any reason, you kill the Demagogue before speaking to Less Longbow and get the bonus objective, you won't get the reward, even if he is dead.

When you first catch sight of Less Longbow on your radar, pause a moment and observe if he is being attacked by the two White Mantle Knights near him. The Knights' attack script is not triggered until you come too close to Less, which means that if you wait long enough, Less will be able to slaughter the two Knights all by himself and will therefore be in no danger. If, however, you come too close, the two White Mantle Knights will start pummeling Less. He can take some punishment and uses Healing Signet liberally, but if you defeat the nearby boss just before reaching him the knights activate "I Will Avenge You!", which is a problem. In this scenario, you'll have to quickly rush to Less' aid before he dies. If you have a human-controlled monk in your party, send him on ahead to keep Less alive until the rest of the group can get there. A Ranger with Throw Dirt and a running skill can also keep Less alive for a few more crucial seconds. Quite often, Less may spawn in the rear area and the White Mantle Knights will not be able to reach him. In that case, he is in no danger as the Knights don't seem to move.

There is another path just before that area, guarded by two White Mantle, hidden by a house/bush figure. You can climb it and only have to deal with the two White Mantle instead of the groups. This path is probably easier than the one listed on the map. Instead of approaching Less from the east, you approach from the south.

If you do the crystal attuning portion by killing all of the White Mantle as described above, killing the Demagogue before attuning the final thorn pedestal is very easy.

There are also some less reliable but faster alternative approaches. One is to hope that a warthog spawns close enough to the vine gate that you can kill it and then use Necrotic Traversal or Consume Corpse to warp to its corpse. Often, there is no warthog that spawns close enough, and so the method fails. Do this before you open the gate, and only the Demagogue will spawn. Either bring a build capable of soloing him, or have everyone kill themselves using vampiric weapons or health sacrifice skills, and use Rebirth to warp them through. This allows you to take your time in killing the Demagogue without worry of the mantle attuning the portals. Note: While using this method you can also use the same henchman warp trick as mentioned in the Dunes of Despair mission. Anchor your heroes and henchmen far away while you use necrotic traversal and then un-anchor them when you get close to the Demagogue. They will magically get through the gate and assist you in the attack.

Another approach is focusing fire to kill the Demagogue early without worrying about attuning all of the crystals later. It's the fastest way, but there's no assurance that you can complete the Mission afterwards. Therefore, doing the bonus this way is meant for players who already did the mission. As you get the crystal, let the White Mantle attune the left pedestal. Let them go (do not attack) and then attune it yourself. Now, run to the right path, past the middle pedestal, and wait for the White Mantle runner to come back to attune the left pedestal again. As they leave his quarters, rush there (by the right path), ignore the White Mantle there (you can possibly avoid aggroing them) and go straight to the Demagogue. Throw everything you've got at him; hopefully you will kill him and complete the Bonus. Also, you can choose to avoid the crystals altogether and head straight for the Demagogue, again, taking the rightmost path. If you want to take a risk, you can leave 2 or 3 of your party behind with running skills and have them attempt to attune the pedestals while you are killing the Demagogue. However, be sure that they don't attune them before Bonus is complete.

The normal mode tactics for the crystal attuning area almost work in hard mode. The mobs run faster, so it helps if your runner has a movement speed skill, but it isn't necessary.

The big problem is that there are three White Mantle Abbots, which are potent healers. Their healing and defensive skills are almost entirely enchantments, so heavy enchantment removal can greatly diminish their healing. Shatter Storm works especially well, even when used by a hero. However, if two or three abbots come up to heal, in addition to a group, it can take quite a while to wear them down. If the next group reaches the party defending the northwest capture point before the previous group is dead, it can be big trouble.

The abbots can often be prevented from coming prematurely if the party will stay way back at the northwest capture point, instead of coming out further to attack. This doesn't always work, but when it does, it makes the mission pretty easy.

Less Longbow: You'll not take me alive, you cultist creeps!...I am grateful for your aid. You have my eternal gratitude. You must know, the White Mantle are led by a wicked evil man. He's their champion. They call him the Demagogue. He drives the Mantle forward. They will do anything he asks. Until he has been brought down, the Mantle will always have strength.

Demagogue: Come, my Mantle. We must eradicate the heretics!

Evennia: Now we have a safe place from which to strike back at the White Mantle. Today the tides have been turned. Come on. The old druid temple should be just over the waterfall. It's time to take a look at our new home.

Voice of Glint: A new chapter now lies open for Tyria. The page has been turned, and the conflict begins in earnest. All is as I have foreseen.