Bahdok Caverns is a cave connecting Kourna and Vabbi. There is a river running along the western side of the cavern, and much of the lower, Southern half of it is full of shallow water. The north is higher up and drier. Until recently, the cave was mostly unknown, and was used as a smuggler's passage. 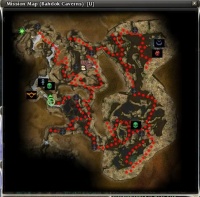