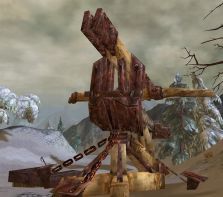 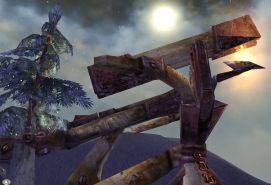 Ballista, armed, in the Shiverpeak Mountains near Frost Gate

These large siege weapons resemble giant crossbows and are permanent fixures of a map — they cannot be "picked up", moved, or even aimed. They can still be used, however, by enemies and players alike. Each ballista has a lever near it, simply click on the lever and the weapon will fire at its preset range and direction, causing a very powerful explosion where it hits. It does not need reloading, but it does take a couple seconds before it can be fired again.

Ballistae are primarily found in the Shiverpeak Mountains, at areas of strategic importance. Most Ballistae break when you kill the NPC controller.