The Barbarous Shore is an explorable area in the outer parts of Kourna. The titular shore is a red-rocked fjord in the south, which is a haven for Corsairs. There is a small cave that serves as a hideout, and a tent-village on the west side of the bay. To the north and the east is Kournan savannah, though rockier than usual, populated by much of the local wildlife, though the high concentration of rare Elementals in the west may be of interest to Lightbringers. 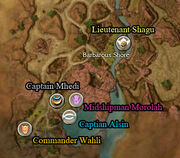