Battle in the Sewers 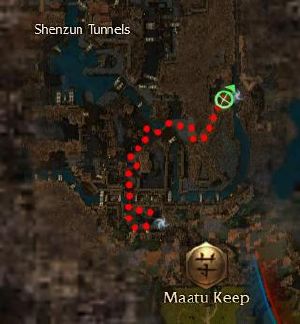 "The emperor tells me that you are heading to the Sunjiang District to fight Shiro. You are either very brave or very foolhardy. Commander Jafai is holding down the front lines there, but I do not think things are going in our favor. Escort these members of the emperor's Royal Guard to Commander Jafai to help reinforce his position."

Accept: "Just doing my duty to the emperor."
Reject: "On second thought, it does sound foolhardy."
When asked about quest: "I have sent word to Commander Jafai in the Sunjiang District to expect you and the Royal Guard. You should make haste, they really need the reinforcements."

"You have no idea how relieved I am to see you. These reinforcements will help save many lives. Let me know when you are ready, and we will secure an area for you within."

"It is good you have come; we need all the help we can get! If you are ready we can push forward into the Sunjiang District."

Accept: "I am ready." (goes straight to the next dialogue below)
Reject: "Not right now."

"Your entire party is about to be moved to the next area. Make sure all party members are ready first. Do you wish to continue?"

Shiro: "They have arrived."
Shiro: "Good. Let them come."

"We have reinforced this area, but I do not know how long we can hold out against this onslaught. With each body we can buy you a chance to stop Shiro. I'm starting to think the stench down here is never going to leave my nostrils...."

After receiving the quest, travel to Tahnnakai Temple or Maatu Keep and form a group. Find the Royal Guard outside and follow the directions. Clear the mobs on the way and keep the Guard alive until reaching the target destination. Commander Jafai will allow passage into the Sunjiang District location upon completion, where the mission may be accessed. Do not linger around since there will be more groups of Afflicted approaching after reaching the commander.