Location: The Falls, far to the west of the entrance, by the falls
Collecting: 5 Behemoth Jaws

Location: On top of a hill in Quarrel Falls
Collecting: 5 Behemoth Jaws 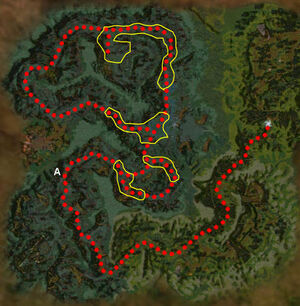 Root Behemoths in The Falls

The Falls
Start from Ventari's Refuge.

Dry Top
The Root Behemoths are located as follows: several in the NW (near Ettin's Back); a few along the SW path; and two clusters of three each in the SE corner (NE of Tangle Root).
Enter Dry Top from Maguuma Stade; head left to kill a handful of foes (mostly to wear out the drop rate reduction), then backtrack to take out the cluster. Rezone & repeat. Another option is to head for Tangle Root, take out the six there, and use that portal to rezone.

Builds used for farming Totem Axes can also be used here. The Any/Rt Totem Axe Farmer is currently the highest rated on PvX; other builds can be found here.