Bjora Marches is the northeastern part of the Far Shiverpeaks, bordering on the Charr Homelands. The southeastern part of this area is already beginning to be less mountainous, having no snow and being characterized by several low cliffs. The rest of this area has many small peaks, meaning that there are many narrow passes. There is a village in the northwest, and a cave in the south that was once someone's home but is now overrun with Stonewolves. 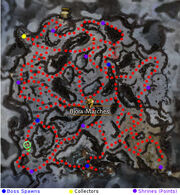 "It would strike a crippling blow to those pathetic Deldrimor if we were to deny them such prizes."
"If the relics lie within, they will be ours for the taking!"
"We will muster our forces and push onwards."
"Kill anything that stands in your way!"