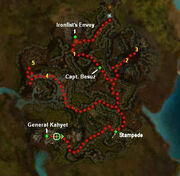 Tahlkora must be in your party.

All characters created in the Nightfall campaign must have completed Following the Trail.

Find General Kahyet. Prevent her from striking a deal with Ironfist, the corsair captain.

The first objective is to eliminate Ironfist's Envoy, and steal their garb. After this you will be disguised as Ironfist's Envoy, and you will be able to follow Captain Besuz to the meeting with General Kahyet. You will encounter many groups of Skale along the way, including a relatively large "stampede" - most of the skale in this group are low-level, though, so it shouldn't pose a problem. Captain Besuz will stop before each group and command you to kill them, and he will advance once the group is dead. As you approach the temple in the southwest, you will encounter a couple groups of Skree.

General Kahyet is accompanied by two Grasps of Chaos. When they arrive, after a short dialogue, they and Captain Besuz will turn hostile. Kill them all to end the mission.

Unfortunately, there are neutral Kournan Guards blocking many of the paths through the swamp, including the shortest routes to the remaining Monitors, so you will have to take the paths marked on the map. Captain Besuz will not follow you, and since he is an NPC and not an ally, he will not be attacked while you are away.

Rinkhal Monitors are never linked to other mobs, so you can always pull them solo if so inclined. There are several groups that wander near point 5, so it can help to pull carefully in order to avoid fighting as many as 12 mobs at once.

The skale stampede can be dangerous if you take them all on at once. Instead, split off west from Besuz as to go on the route to the last two rinkhal monitors, and then turn south at the first opportunity. You'll reach the skale stampede mobs from the north, but they won't stampede until you approach from the east. There are three groups, and they have different movement AI that makes them easier to pull apart if it is before they stampede. They will follow a fixed distance, then stop and turn back, so you can attack them in relative safety from a little beyond that distance.

The Skree Griffons are now quite strong healers, as they have a resurrect spell and decent heals, so be sure to target them early. The first group of skree doesn't always have a griffon, but the second group does, and drops on you as you pass their area.

Ironfist's Envoy: Where in Damnation are we? Look at the map again! Ironfist is going to have our heads if we're late to meet the Kournans.

Captain Besuz: You're to come with me. Hurry up! I want to get out of this god accursed bog as quickly as possible.

Captain Besuz: I was instructed to guide you, not fight for you. You're on your own.

Captain Besuz: You're late, you know. If my soldiers were as undisciplined as you, they'd hang. Now move it!

Captain Besuz: I thought Ironfist was supposed to be with you. No matter. I have orders to follow. Come with me.

Captain Besuz: Hurry up and kill these creatures. I've no intrest in standing in this filthy place any longer than necessary.

Captain Besuz: This next part's a little tricky. Fortunately for you rabble, I've been stuck in this place for weeks, so I know my way around.

Corsair Commandant: Argh! It's a skale stampede! Run for it while ye can!

Captain Besuz: Looks like trouble. You know what to do.

Captain Besuz: Stop wasting time and follow me. The general won't tolerate being made to wait.

Captain Besuz: Go on and clear the way. I'd join in, but I don't want to ruin your fun.

Captain Besuz: Haven't given up yet, have you? Come on then.

Captain Besuz: You can't go a hundred paces around here without running into something that wants to eat you. Take care of them, will you?

Captain Besuz: I can see you enjoy killing. I expect you've sown quite a bit of chaos here in Istan.

Captain Besuz: Don't be shy. Go on, give those monsters what for.

Captain Besuz: You're better fighters than I expected. I'm beginning to understand why we hired you.

Captain Besuz: I'll be right here. Let me know when the path is safe.

Captain Besuz: It's just a thought, but those outfits of yours are so concealing, I imagine we could dress up some Kournan soldiers that way and cause some real damage. Who's to know who you really are when you're dressed like that, right?

Captain Besuz: We don't have a harpy problem back home, but my time here has taught me not to ignore these vicious creatures.

Captain Besuz: It's not far now. I should warn you: the general holds some unusual religious beliefs. Don't let that concern you. You're here to serve her gold, not her god.

Captain Besuz: This is the old Sunspear Crypt. The rendezvous is just around the bend.

Captain Besuz: Looks like trouble. You know what to do.

General Kahyet: Who are these people, Besuz? Ironfist himself was to come to discuss our master strategy against the Sunspears. I am not here to merely hand out gold to his lackeys.

Tahlkora: Who are you calling a lackey? We're not even corsairs, you old fool. So tell me, how does admitting your treachery to disguised Sunspears fit your big 'master strategy?

General Kahyet: It matters not, child. Your corpses will keep my secrets.

<party leader>: The other Kournans went back to Gandara. Why did General Kahyet stay?

General Kahyet: Fool. You are all doomed.

<party leader>: Why are you here? What do you want?

Tahlkora: I don't think she's listening to you.

General Kahyet: You cannot stop it! You will all perish! Nightfall comes!

Tahlkora: We won, right? She was the villain, and we killed her. It's all over, right?

<party leader>: That depends on who else was involved in this.

<party leader>: Varesh Ossa? Is she a part of this?

Tahlkora: I heard the two of them talking about Abaddon earlier.

<party leader>: Then it's not all over. We have much more work to do.