Blankets for the Settlers 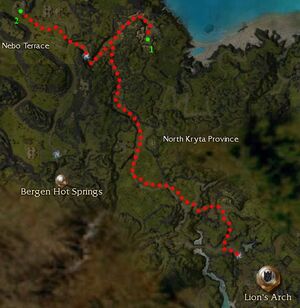 "I have arranged to open trade with Nebo Village to the west. They are renowned for their weaving, and my people here are short on many cloth goods, such as blankets. Their village has, of late, been subject to numerous predations by bandits and while we cannot spare guards, our passage across the mountains was costly enough that we have weapons to spare.

Can you take this stash of weapons and trade them to Ethan the artisan in Nebo Village?"

"Ah, yes. I have been expecting you. I hope this is the beginning of much fruitful trade between the Ascalon Settlement and our village."

"These blankets will be put to good use. Thank you for securing them."

Take the weapons from Captain Greywind (1 on the map), walk over to Etham the Artisan (2 on the map) in Nebo Village (which is just across the nearest zone line to the west) who will give you some blankets. Return to Greywind with the blankets for your reward.

The quest can be completed without even fighting, providing you have not immediately completed The Last Hog quest, as this may have left some Gypsie Ettins in the entrance to Nebo Terrace.