From GuildWiki
(Redirected from Bleached bones)
Jump to: navigation, search

Bleached Bones can be found scattered across the Crystal Desert region. When clicked upon they display a short text comprising of a journal entry - or presumably the last words of the deceased person to whom the bones belonged.

The notes seem a varied assortment of entries from different groups that tried to live in the desert. At least two entries indicated that they came after the Elonians. These bones are part of the quest Family Soul.

Note: The bones are hard to spot without holding down the [Alt] key, being very small and inconspicuous.
Map with the locations of all bleached bones

The following are the Bleached Bones entries sorted by desert area: 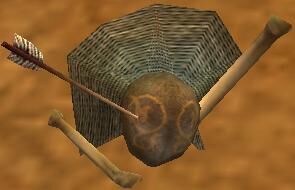 There are also sets of Bleached Bones in Factions and Nightfall. On the Shing Jea Island in Cantha, they are located on the northeast shore of Haiju Lagoon (from its central island) and north of the collector Junsu, just above the point where the The Thieving Nanny quest is resolved. There are also sets in Joko's Domain in Elona, directly outside the Basalt Grotto, in the NorthWest of The Ruptured Heart (part of the Pilgrimage quest), and in the Remains of Sahlahja. They appear to have no dialogue attached. In addition, they used to appear in the Luxon or Kurzick settlement camps in Kryta, which no longer appear, after completion of either the Destroy the Kurzicks! or Crush the Luxons! quests. These quests were part of a storyline sequence designed to familiarize players with the Factions campaign before it was released. The quests and the settlements disappeared shortly after the campaign's release.