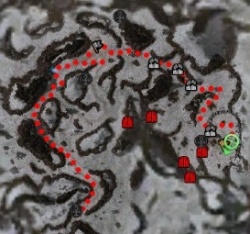 Automatically added after completing Flames of the Bear Spirit
After first completion, can be obtained from:

Flames of the Bear Spirit 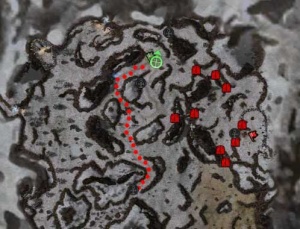 Location of bosses and Shrine

Head to the Sacred Altar in Jaga Moraine to summon the Bear Spirit. The altar is initially owned by mobs, and you must capture it. Each character within range of the altar provides one pip of capture speed toward the altar, with mobs and your party members canceling each other out. Arctic Nightmares will spawn to attack as you try to capture the altar if Flames of the Bear Spirit is active, but not on subsequent runs if you repeat the mission. Altar capture speed is capped at four pips, and if you spend enough time capturing it, it will go from fully controlled by mobs (full red bar) to fully controlled by you (full blue bar). Beware of the Arctic Nightmares' skill Consume Flames, they will use it often to reduce your altar capturing progress, and killing them is the best way to mitigate the skill's effect. Capturing the altar makes the Bear Spirit appear, speak to her to initiate the quest and then walk through the portal to Bjora Marches.

Fight your way through the Charr, Mandragor, and Elementals on your way to the Shrine of the Bear Spirit. The shrine is guarded by three groups of Charr, each with a boss. The groups follow patrol patterns that make them easy to pull apart from each other. After defeating all three groups, click on the shrine to obtain the temporary skill Ursan Aura.

Head for Jora's homestead, and use Ursan Aura to allow you to destroy the barricades blocking the path to the Charr with Ursan Force. Because Ursan Force is needed, it is necessary for at least one player in the party to pick up Ursan Aura. Destroy all five groups of Charr to complete the quest. After a cutscene, the party will be returned to Gunnar's Hold.

There are two ways that the quest can be shortened when repeated. First, you can start from Longeye's Ledge and run across Bjora Marches to the Sacred Altar. There is no need to stop to talk to Egil Fireteller, as that is part of Flames of the Bear Spirit and not this mission. Second, if someone in the party brings Ursan Blessing (a weaker but permanent version of Ursan Aura available from A Hunter's Pride), it can be used to destroy the Charr barricades without needing to go to the Shrine of the Bear Spirit and kill the bosses.

There are vastly more Vaettir guarding the Sacred Altar area in hard mode, and they are much stronger. Vaettir have extremely high armor and significant self-healing, so it can take a while to wear them down, and their heavy health degeneration can put a considerable strain on your healers. One group of four is manageable, but two at a time is not.

Most of the Vaettir can be avoided by starting from Longeye's Ledge and running through Bjora Marches to get to Jaga Moraine, but this is only helpful if you have completed the Flames of the Bear Spirit quest before. It isn't necessary to fight anything in Bjora Marches, as the mobs move slowly and are rather spread out. Once in Jaga Moraine, approach the Sacred Altar from the East side and try to capture from the edge of its range. If you're lucky, you can sneak in, capture the altar, make the Bear Spirit appear, talk to the her, and then go back to Bjora Marches to start the mission proper.

If you're not so lucky, you'll aggro Vaettir in the process. There are several linked groups of four that can wander near enough to the Sacred Altar to aggro on you there. Most of them will be far enough, but it's likely that at least one will come too close. If you aggro any, immediately run away to the East and pull the group you aggroed with you to where there is more room to fight. If you stay near the altar and fight, party members scrambling around will likely aggro additional groups and cause a wipe. If multiple groups follow you, run all the way into Bjora Marches and then come back to reset the instance and try again.

Once back in Bjora Marches for the mission itself, hard mode greatly increases the level of most mobs. There are a number of groups of three Charr or five Mandragor that patrol long distances with overlapping routes. It helps immensely to pull only one group at a time, though two groups of Charr at a time is still manageable. Charr Flameshielders deal considerable area damage with Fire Storm and Meteor Shower, so it can help to spread out and/or interrupt them. You may need to wait for a convenient time to pull a single group, or pull a group far out of its route to get it out of the other patrol routes.

If you follow the route on the map, you'll only have to fight one Mandragor group, but it's quite dangerous, still. The Dreamroot Mandragor uses Fevered Dreams, and the others spread a lot of conditions, which can easily get four or five conditions on your entire party at once, including dazed. You'll end up with a lot of conditions almost no matter what you do, and removed conditions will very quickly be reapplied. Flagging your party apart will at least mean that some party members are relatively safe. Kill the Dreamroot Mandragor first, as its Fevered Dreams is what makes the group so dangerous. Beware of the Mandragor Scavengers' numerous traps as well, as they are a large source of conditions, but can be avoided.

The easiest way to run this mission in Hard Mode is to have somebody with Ursan Blessing so that you do not have to go near the shrine. A minion master can also improve survivability.

When fighting the five groups of Charr at the end, be aware that Charr Dominators have Resurrection Chant. They must be killed quickly, or else they will continually resurrect anything else that you kill. Most of the groups have two Charr Dominators, but usually no healers. The group with the boss Elmohr Snowmender has only one Charr Dominator, but it also has a monk boss that is a very powerful healer, making it the hardest group. It helps to kill the Dominator first, then the Flameshielder, and then the boss.