From GuildWiki
(Redirected from Boreas Seabed)
Jump to: navigation, search 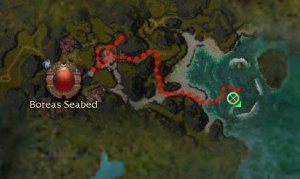 Triumph in the Convocation and earn the right to use the Spear of Archemorus against Shiro.

1 You can only earn the faction reward the first time you complete the mission at a certain level in either mode, you will not earn faction for completing it in the other mode.

There are two parts to this mission: in the first part, the party is expected to beat 3 Luxon teams, thus earning the right to wield the Spear of Archemorus. In the later part, the party is to use the spear to defeat the mighty kraken named Zhu Hanuku.

The two bosses that are with every team have a Resurrection Signet each, which they will use instantly when one of their team members dies. It can sometimes be useful to begin by targeting the most fragile foes to waste their resurrection Signet.

First, the Crab Clan team will come from the left, it will be led by Daeman and Seaguard Eli. The biggest threat they pose is the interruption they can inflict. Daeman has Choking Gas and can shut down a spell caster completely for some time.

Next, the Serpent Clan team will come from the middle and will feature Aurora and Seaguard Gita. Seaguard Gita is a monk so it's best to dispatch her quickly. Beware Aurora's Barrage skill as it deals Area of Effect damage. Also, the two Luxon Warriors of this team can be a problem if they gang up on a spell caster.

Lastly, the Turtle Clan is Argo's team, and he can be quite formidable for those caught unaware. His elementalist attacks and especially his special skill Argo's Cry can easily overwhelm the party if they are not prepared. The other boss, Seaguard Hala, is a mesmer, but she offers minimal threat. The party should focus its attack on Argo from the very beginning and make sure to interrupt his cry.

After the three teams are defeated, a cutscene will lead to the next part.

Note: Stay away from the center stand. The Spear of Archemorus will charge up during the fighting, and occasionally "discharge" when full, striking any nearby party members for 300 damage. It does not seem to affect the enemy teams, though.

To make the kraken Zhu Hanuku appear on the map, you must first kill a specific group of Kraken Spawn that patrol along the edge of the Jade Sea. Exit the arena through the gate that opened after the Part 1 cutscene (opposite the spear pedestal). You will be walking out onto the Jade Sea. There will be groups of Naga and Rot Wallows on the shore. Once you get to the sea, you will encounter groups of Creeping Carp and the like, but you will also notice groups of Kraken Spawn. Destroy these and a new Kraken Spawn will appear that will head to a destination further east. Kill this second group of Kraken Spawn to make Zhu Hanuku appear.

The kraken Zhu Hanuku has only two skills: Resurrect which enables him to resurrect the recently slain spawn and a very devastating spell called Jade Fury. Defeating the kraken can be easily achieved if the party keeps him interrupted to shut down the monster's lone offensive skill, Jade Fury. If this skill is denied, killing the monster will be noticeably easier.

Zhu Hanuku will spawn when one particular kraken spawn in the group is killed, not necessarily the last one. It can help to pull the kraken spawns away from their initial location, so that any corpses they leave will be out of range of Zhu Hanuku when it spawns, and it will be unable to resurrect them.

It helps immensely to interrupt Jade Fury. Between an eight second recharge and a five second casting time, you'll need to be able to interrupt at least every 12 seconds or so to always get it. This can be done with one interrupt with a recharge time of 12 seconds or less, or a combination of multiple interrupts. Jade Fury is a spell, so virtually any interrupt skill will be able to successfully interrupt it. Depending on your class, some interrupts may be more convenient to use than others, of course.

Zhu Hanuku still has a very high health and armor level, as well as a quite potent ranged attack. Apart from Jade Fury, this is only a problem if you have to fight kraken spawns at the same time. The damage dealt by the Spear of Archemorus is multiplied several times against Zhu Hanuku, though, so a level 5 spear can deal up to 1900 damage when used against the kraken.

The twenty minutes allowed for master's reward are vastly more time than the mission takes unless you get completely lost.

The 20 minute time limit for master's reward is unchanged for hard mode, but is adequate time as to not be a meaningful factor.

It helps immensely to bring a Necromancer with Enfeeble or Enfeebling Blood, a Mesmer with several interrupts, and/or a Ranger with Broad Head Arrow or Concussion Shot.

In the first battle, Seaguard Eli and Daeman have impressive damage outputs, and should be kept weakened or blinded at all times until dead. The necromancer listed above can handle this, though if it is a hero, you'll have to cast the skill manually to alternate targets. All of the mobs in this group have considerable self-healing except for the Luxon Necromancer, so kill it first repeatedly, to waste the Resurrection Signets of the bosses.

In the second battle, Aurora will spam Barrage, while Seaguard Gita will heal. Lock the mesmer onto Gita and the necromancer onto Aurora to greatly hamper both. Gita will remove conditions from Aurora, so it's not possible to keep Aurora perpetually weakened or blinded, and it can help to spread out a bit to limit the damage from barrage. With the useless Rebirth as Gita's resurrection skill, this group essentially can only resurrect once. Either kill the Luxon Mesmer first to waste Aurora's signet, or kill Aurora first.

In the third battle, lock the mesmer onto Argo. The critical skill to interrupt is Argo's Cry, but interrupting anything else is good, too. Note that whoever goes in first will immediately be blasted by both Luxon Elementalists and Argo, and a mesmer hero locked onto Argo will step up as the opponents approach, possibly resulting in immediate death--and hence no interruptions. As such, some other heavily armored character should step up first to take the initial blast. Kill the non-bosses first to waste the resurrection signets of the bosses, and then kill Argo. Seaguard Hala isn't that dangerous, and once Argo is dead, the battle is well in hand.

Any group capable of winning the convocation should cruise through the rest of the mission by the same tactics as above, even with considerable death penalty.

In the latter half of the mission, minions dying will power up the spear, so it can be very useful to bring a minion bomber to charge the spear.

When this happens player movement is sometimes adversely affected.