This is a mission entry. For information on the mission outpost Borlis Pass, see Borlis Pass (outpost).

Negotiate passage to Grooble's Gulch and shelter for the Ascalon refugees.

First off, you want to talk to Ascalon Guard Hayden who is holding the Torch. He will pass the torch to you and you'll have to carry it throughout the first part of the mission. You need to light the Storm Beacons until you come to Ascalon Guard Tolis (A on the map). Don't forget to light the one right next to Hayden. You shouldn't have too much trouble against the centaur patrols.

When you reach the second guard and give him the torch, he'll open the gate and you'll receive a new objective, which tells you to unlock the fortress door, which when complete will add: stop the siege by destroying the ballistae. Simply follow the path. Grab a Powder Keg from the nearby Dwarven Powder Keg Station and blow the gate open when you reach it (B on the map). Here you'll meet your first two ballistae, which are guarded by a boss (point C on the map). After defeating the mob, run to the left and hit the lever to access the next area. (To activate the bonus, run further left and use a keg to blow open the doors where Rornak Stonesledge is imprisoned.)

Note: If you drop a Powder Keg at any time, it will explode and you will have to get another one. The explosion does not harm you, your allies or enemies.
Tip: Try and clear all the monsters first, then use the Powder Kegs.

The next part is straightforward. Fight your way through the enemies to break the siege. Destroy the two ballistae as well (D on the map). You'll meet up with Rurik and go through a short movie, where King Jalis Ironhammer will give you an Enchanted Torch. Run across the bridge and turn left and you'll eventually get to three storm beacons guarded by Summit Beastmasters (E on the map). Light these three beacons to complete the primary objective. 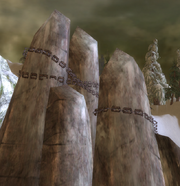 Place the keg next to these pylons.

To get the bonus, free and speak to the dwarf leader, Rornak Stonesledge (1 on the map). He will ask you to slay the Ice Drake, Whiskar Featherstorm, whose lair is blocked by ice and snow.

Use another Powder Keg to destroy the wood pylons in Rornak's cell (see photo). You might need to use more than one keg. Follow the icy path to the drake (2 on the map).

Frostfire Dryders guard the route to the Ice Drake and the beast itself is not too taxing. The Dryders cast Suffering, which can be sneaky in draining henchmen healer energy, so be careful not to rush into the next battle while the healers are out of energy.

The Dolyak Riders' healing abilities can pose a problem, especially when there are two of them. You can prevent this by careful pulling, because a single group doesn't contain more than one Dolyak. Taking them out is a lot easier if you can interrupt their spells. Lingering Curse and Scourge Healing can also help reduce their effectiveness.

Ascalon Guard Hayden: This storm is pretty bad. A group could get lost real easy up in the Shiverpeaks. Better light the storm beacons, or we'll never get through. Take this. You'll need it to ignite the beacons.

Ascalon Guard Tolis: You've lit all the storm beacons. Leave me the torch, and I'll keep them burning. Prince Rurik left me behind three days ago to warn any newcomers. The Dwarves are in the middle of a civil war. The Stone Summit don't take kindly to humans in their mountains. If you're gonna go after Rurik, you'll need to find a way through that Dwarven door over there. If I was you, I'd look for some mining equipment. Maybe the Dwarves got some powder kegs lying around.

Rornak Stonesledge: Ye've freed me of me bonds, and I am grateful te ye. Damn Stone Summit caught me sneakin' round Maladar's fort, tryin' to spy on their plans. They've got an ice drake they're plannin' to unleash on Grooble's Gulch. I've smelled its foul stench when the winds blows this way. If ye find it, and kill it, I'd be much obliged.

Rornak Stonesledge: Talk to King Jalis Ironhammer. He will help you garner safe passage into the Gulch. I will see you there.

Prince Rurik: Ah, my good and excellent friends. I got pinned down here in Krok's Hollow when the Stone Summit attacked.

<party leader>: Good thing we arrived when we did.

Prince Rurik: I owe you many thanks. I would raise a pint of Dwarven Ale in you honor, but there is still much work to do.

<party leader>: Perhaps when everyone is safely through Borlis Pass.

Prince Rurik: Agreed. But now I must go back and lead our people to Grooble's Gulch. You go on ahead and clear the way. Secure us shelter for the night, and then we'll see about that ale.

<party leader>: As you wish, my prince.

Prince Rurik: Talk to King Ironhammer. He'll help you garner safe passage into the Gulch. I will see you there.

Jalis Ironhammer: The Good Dwarves of Deldrimor thank you for your help.

<party leader>: We do what we can to honor the old alliances.

Jalis Ironhammer: Then the Deldrimor Dwarves will honor them as well. Your prince's request for passage through the mountains has been granted. Take this enchanted torch and light the beacon outside Grooble's Gulch. My brother, Brechnar Ironhammer, will open the gate for you once he sees the arcane flame. Your people will be safe in the Gulch for the night.

Jalis Ironhammer: Anything for our friends. Now, waste no more time here. Night will be upon you, and your people will freeze in the cold without shelter. Follow me to the gate.

Prince Rurik: The beacon! It's lit! The way must be clear. Now is our chance. We make for Grooble's Gulch!

Deldrimor Scout: The fighting has stopped. They must have had too much ale tonight.

Brechnar Ironhammer: No. That was no brawl. I could swear I heard the shouts of men.

Deldrimor Scout: What would men be doing on Shiverpeak?

Deldrimor Captain: Sir, the beacon has been lit!

Deldrimor Captain: The flames burn brightly, sir! And there's more. A band of men are marching for the Gulch. They're approaching the gate.

Deldrimor Scout: So it was men who lit the beacon.

Brechnar Ironhammer: Whoever it was, they had to get through Dagnar's men to do it. Any enemy of the Stone Summit is a friend of Deldrimor. Open the gate! Captain prepare quarters.

Prince Rurik: I am Rurik of Ascalon. Your brother, the king, speaks highly of your hospitality.

Brechnar Ironhammer: My brother tells the truth. What brings you here?

Prince Rurik: I am leading these refugees over the Shiverpeaks. We wish to cross Borlis Pass into the human Kingdom of Kryta.

Brechnar Ironhammer: Well then, Rurik of Ascalon, welcome to Grooble's Gulch. You are free to stay with us as long as you will.

Prince Rurik: Thank you, mountain friend. Rin is forever in your debt.