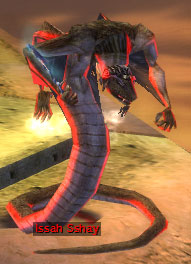 Bosses are bigger and tougher versions of regular mobs, clearly distinguishable by the fact they usually have a proper name rather than a generic one, as well as a glowing aura signifying their profession color. In most cases they have a slightly higher level than the corresponding mob (i.e. if a regular Grawl is level 4, a Grawl boss might be level 6). There are bosses for almost every type of opponent in the game. Bosses usually have the same skills as their conventional counterpart. When a boss is killed for the first time, the party gets a 2% Morale Boost and all the party members' skills are recharged, including Resurrection Signets. This happens even if the boss is killed by other monsters, without interference of the players. Killing a resurrected boss will not grant another Morale Boost and will not recharge skills.

The corpse of a boss will not disappear after some time, as regular corpses do, but will stay visible. This is to allow for the use of Signet of Capture to capture skills from dead bosses.

Bosses have a colored aura around them which denotes which class they are: