A bot (short for robot) is a program used to do repetitive tasks.

On wikis, bots are used to perform repetitive editing tasks, such as updating links or implementing a formatting change. See GuildWiki:Editing bots project and Wikipedia:Creating a bot for more details. 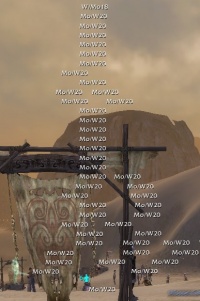 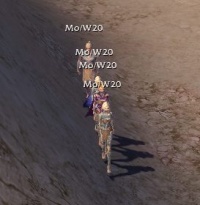 A mark of bots is to do the same repetitive action in exactly the same way, as these Bots are all heading to the same point following the same path.

In online games, they are often used for farming and spamming, and botting is generally considered cheating. They are often used for profit by companies that sell virtual items. Bots are against the terms in the Guild Wars EULA, and will get the bot user's account banned. ArenaNet has used different techniques to counter bot farming, such as reduced drops for solo farmers, nerfing of popular farming areas, and banning of accounts confirmed to be used for bots.

"Botting" and "botter"(s) refer almost exclusively to the use of bots in online games.

Bots are harmful mainly because they make the large-scale gathering of items simple, fast, and easy. This in turn leads to flooding of the market, causing price decreases. Bots are also used by companies and people who sell gold for real money. The idea of selling gold for real money causes a price increase for items that are not commonly farmed by bots. This is because players will just buy gold online instead of working for it like a legitimate player would, and then buy the virtual items they need in the game with that gold. Bot use is greatly frowned upon by regular players.

Some bots return to cities to automatically sell items they have farmed, and are often identified by one or more of the following:

It may be a good idea to first "quiz" the bot before reporting them, although there is often a "bot master" who will respond to such queries, so this is not foolproof.

Suspected bots can be reported to ArenaNet through their "Ask a Question" form on the Guild Wars site. Instructions for doing so can be found here. Another way of reporting bots is to target the suspected bot, type /report in chat and then select botting from the list. The name of the bot can be typed after '/report' if you can't find them in the outpost. Note that after your report, you will not receive correspondence about proceedings between ArenaNet and the alleged violator.