Warning: This article uses different meanings of the term Tyria in different places.

Cantha is a southern continent introduced in 'Guild Wars Factions'. There are three ethnic nation-states on this continent: Cantha, the Kurzicks and the Luxons. They form the Canthan Empire, which is ruled by the Emperor of Cantha, currently Emperor Kisu.

A drawn map of the Canthan continent can be found on the official Japanese Factions site.

Cantha is divided into five regions:

Regions accessible in Guild Wars Eye of the North:

1 The Depths of Tyria (overlaps Tyria, Cantha and Elona).

The Luxons and the Kurzicks are vassal nations absorbed into the Canthan Empire long ago. While they politically and economically fall under the Empire, they retain their unique cultures to this day, and are granted certain amounts of autonomy. 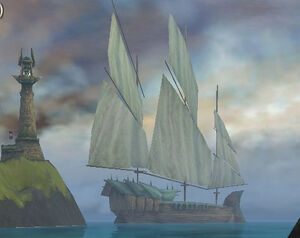 Ship from Cantha in the Docks of Lion's Arch

Cantha (also known as the "Empire of the Dragon"), an empire of sailing merchants, maintains close trade relations with Kryta. Cargo ships and ferries from Cantha land at the docks of Lion's Arch and Sanctum Cay on a daily basis.

This is what Jiaju Tai, a merchant from Cantha, explains about the location of Cantha:

"Cantha lies south (of Kryta), across the ocean ... past the ruins of Orr, past the islands of fire, past the crystal lands of burning sun, and beyond the clashing seas. Only the greatest sailors dare such a journey, I assure you."

However, Cantha also maintains a few islands as trade outposts much closer to Kryta, in the Sea of Sorrows, the gulf south of Kryta.

(interim translation from "皇帝の宮廷") Much of the Emperor's Court consist of the nobility. It is filled with people of various backgrounds, flatterers in positions of trust, as well as Kurzick and Luxon spies who don't bother to conceal their identities.

The Celestial Ministry is a major part of the bureaucracy of the Canthan empire. Over the long years, it has grown overly large and has ceased to function effectively. Even though the Emperor, highest authority of the nation, has sensed the corruption spreading in the bureaucracy, he is unable to stop the bureaucracy sweeping through Kaineng City.

Cantha gives Guilds the opportunity to settle their Guild Hall on one of their islands in The Battle Isles. To do this, talk to the Canthan Ferry Captain at the docks of Lion's Arch and take the Canthan Ferry.

This is what the Canthan Ambassador explains upon your arrival at any of the islands:

"These islands and many like them across the ocean are within the domain of the great empire of Cantha. While the northern powers fear the influence of powerful guilds, Cantha recognizes the value that many guilds bring to Tyria. If you are the leader of a reputable guild, you can petition to make your home on one of the Canthan islands."

Read the Guild Hall Guide for more detailed information about how to get a Guild Hall.

How do I get there?[edit | edit source]

You start off on the continent of Cantha if you create a Factions character, but if you create a character in Prophecies or Nightfall, you will have to unlock travel to Cantha via the appropriate quest:

Likewise, you can travel to Elona or Tyria from Cantha if you have their respective campaigns: