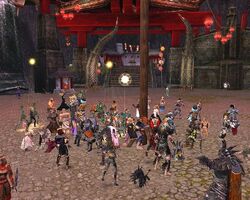 Canthan New Year is the first day of the Canthan Calendar, when the people of Cantha prepare and partake in a great feast to honor the particular celestial animal who will watch over them during the coming year. According to tradition, if the celestial animal is satisfied with the meal, it will bestow good luck upon the populace for the coming year.

During the Canthan New Year, many activities take place in and around Shing Jea Monastery.

Accessed by talking to the Rollerbeetle Trainer in Lion's Arch, Shing Jea Monastery, Kamadan, and the Great Temple of Balthazar.

At the end of the Canthan New Year event, the players with the top 100 scores receive a miniature Greased Lightning.

Only available in Lion's Arch from Lucky Hochei. A simple game of Rock, Paper, Scissors.

The Celestial Feast is the finale of Canthan New Year, heralding the Celestial Animal's arrival in Shing Jea Monastery. 8 minutes before the animal arrives, the imperial chefs begin preparing their dishes for the feast, calling out for players to provide the specific ingredients they require. When all 5 dishes are ready, or when the timer expires, the Celestial Animal will appear and partake of the dishes that have been prepared.

All players in a district are given rewards depending on how many dishes were completed in that district. If no dishes are completed, the Celestial Animal will express its displeasure by transforming everyone in the district into the current year's animal.

To create dishes to please the great celestial, the Imperial Chefs will be looking for these ingredients: