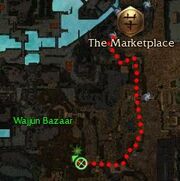 Where Hanzing is being held

"The Am Fah have kidnapped an Imperial Guardsmen and taken him to Wajjun Bazaar. We cannot allow such a crime to go unpunished. An assault on one of the emperor's guardsmen is an assault on the emperor himself!

Will you rescue Imperial Guardsman Hanzing?"

Imperial Guardsman Hanzing: "Let's get out of here before more of the Am Fah come!"

"You have served the Emperor well. Thank you for your service."

Map travel to The Marketplace, and into Wajjun Bazaar. Head south to find the guard and kill his kidnappers. There are three groups surrounding Hanzing so try to separate them for an easier fight.

There is no need to protect him once you get the quest update saying to return for your reward, but if you follow Hanzing, he will walk to the zone for the Undercity and stands on the other side of the portal.