From GuildWiki
(Redirected from Catapult)
Jump to: navigation, search 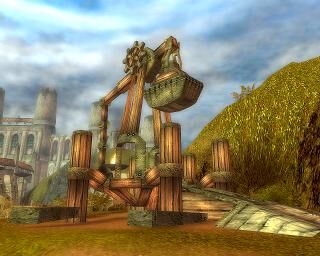 The trebuchet is a powerful siege weapon that can be found in the Fort Ranik mission as well as in some PvP scenarios (outside the Guild Hall). It is different to a ballista in such as it has to be armed before it can be fired. To arm a trebuchet, the lever beside it has to be pulled once. Another activation of the lever will trigger the shot. Trebuchets have unlimited ammunition. Trebuchet damage appears to come in the form of the skill Statue's Blessing.

The Trebuchet in the PvE Campaign[edit | edit source]

The Trebuchet appear several times in the PvE campaigns, though are not repaired in the same manner that they are in GvG matches.

In the Fort Ranik mission, players must repair a trebuchet by finding and returning three bundle items to it. The mission has another trebuchet that is already in working condition. As the campaign goes on, there are Stone Summit ballistae and numerous other enemies with siege attacks, such as Siege Wurms. These cannot be operated by players, and their base AoE damage varies.

In the Chahbek Village Mission, players must load a catapult with Istani Fire Oil before using it.

The Trebuchet in a GvG Match[edit | edit source]

There are two Trebuchet situated on the following guild hall maps:

They are found on the high ground just outside and to the left of the main entrances to the Guild Hall and Away Team Base.

They can be used during GvG matches do deal huge amounts of damage to any player or NPC caught in the blast of their projectile impact. Trebuchet strikes will normally kill any character instantly. They cannot be aimed; the landing area of the projectile impact is in a random place between the gate of the hall and the area where the Guild Lord is.

The Trebuchet must first be repaired with the Repair Kit; this item can be picked up from the high ground just outside and to the right of the Hall and Base Entrances. It must then be carried to the Trebuchet and activated by clicking on the lever of the Trebuchet while carrying the Repair Kit.

The Repair Process takes 4 seconds, once finished the Trebuchet will be ready to load.

The Trebuchet must be loaded before firing by clicking on the lever of the Trebuchet once more. The loading process takes 6 seconds.

Stashing the Repair Kit: Stash the Repair kit from outside your Base or Hall at the start of a GvG match inside your Base or Hall. This is very important as it ensures you will always have access to a repair kit if needed, and ensures the opposing team will not have access to your repair kit. If your opponent neglects to use this tactic you should endeavour to repair his Trebuchet with his own kit as soon as possible.

When to Fire: There are 2 main opportunities for you to use the Trebuchet.