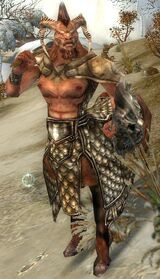 A Shiverpeak Warrior, a typical Centaur

Centaurs are a class of monster, i.e. a species in the bestiary of Guild Wars.

Centaurs are creatures that feature the body of a horse with the upper torso, arms and head of a humanoid, with two curved, bovid horns growing on the head.

Centaurs are among the more intelligent creatures in Tyria, with a complex social structure. They used to live in peace with humans, but are now at war with them.

By their name and their habitat, Tyrian centaurs can be split up into four groups:

There is only one named group of Centaurs in Elona, the Veldrunner pride of Kourna, although the existence of other unnamed prides is mentioned. Though they are not at open war with humans, and bicker amongst themselves, they are very disdainful of humans in general.

Centaurs usually come in groups of 3-5, with a mixture of melee attackers, ranged attackers, spellcasters and healers. There is no predominant profession among Centaurs; they have specialists in every core profession. It is this mixture that makes them dangerous. Bringing down the support units, especially the healers, quickly is essential when attacking such a group.

Furthermore keep in mind that Centaurs . . .

Centaurs may drop the following loot (besides gold and various weapons and items):

For an alphabetic list of all Centaurs, including bosses and centaur NPCs, see also: Category:Centaurs