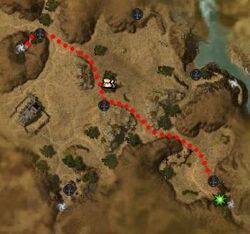 Quest map through the Jahai Bluffs from the Command post

You won't believe this! While you were gone a Centaur somehow infiltrated the Command Post. He hasn't threatened anyone yet, but I'm worried he might. He is pretty angry and doesn't seem to like humans. He refuses to talk with anyone but you. You'd better see what he wants before he gets violent.

Accept: If I can handle demons, I can handle a Centaur.
Reject: Maybe later.
When asked about quest: That Centaur is waiting in the Command Post. You'd better find yout what he wants before he gets violent.

I need to speak with you, two-legs! I am Zhed Shadowhoof of the Veldrunner, the last free Centaur pride in Elona. Our leader, Mirza Veldrunner, has been captured and is enslaved at the Kournan work camp in Dejarin Estate.

I have heard of your struggle against Varesh Ossa. If you are truly sincere in your motives, I ask... no, demand... that you and a contingent of your finest accompany me on a rescue mission to free our leader. Otherwise, I will go alone, and if captured I will be forced to disclose your location.

Gather your party and go to the Jahai Bluffs. I will be there with an informant who will escort us past the guards at the Kodonur Crossroads. Fight alongside us, or the Kournan dogs will learn of your hideout. Which outcome do you prefer, two-legs?

Zhed and I have shared interests. He needs to free his noble Centaur leader and I need a certain overbearing overseer taken care of.

Zhed has an ally outside Kodonur Crossroads. Together, they've come up with a plan to deceive the Kournans. Follow their instructions.

I wish you luck if that is something you believe in.

Master of Whispers: Zhed, it is time we commenced. Here is the layout of the estate.

Master of Whispers: Join these humans. You will need to work together.

Master of Whispers: It is the only way you will have my help. It is up to you, Zhed.

Zhed Shadowhoof: Fine. We will see how much of a mistake this is, two-legs, when all is said and done.

Ah, so you are the ones I was to wait for.

Player response: We are here with Zhed.

Excellent! Zhed has a brilliant plan to free our brothers. Wait until you hear it!

Accept: We are ready.
Reject: We are not ready yet.

<party leader> So what's this plan of yours?

<party leader>: Surrender? Have you lost your mind?

Zhed Shadowhoof: Hardly. Once we surrender, they will lock us up in a pen in the work camp. We then free ourselves and rescue the other Centaurs.

<party leader>: And how would we free ourselves if we're locked up?

Zhed Shadowhoof: My friend Haroj Firemane is trusted by the guards. They believe his will to be broken.

Zhed Shadowhoof: He has acquired a single key, which he will use to release us.

<party leader>: How do we know you and your friend won't just turn us in?

<party leader>: We have to trust a Centaur who doesn't trust us.

This is the entrance to the Kournan work camp. If you don't have business here, move along. And take that Centaur with you.

Note: You will fail this quest if Zhed Shadowhoof dies before you reach Kodonur. Should that happen, you can re-trigger the quest by returning to an outpost and returning to the zone.

The easiest way to complete this quest is to start from Kodonur. After reaching Zhed, head back the way you came avoiding any new enemies. If you start from the Command Post, try to bring running skills or a Hero with Charge!, either works well. As soon as you speak with Master of Whispers (just outside the portal), run towards Kodonur. Since Zhed needs to complete his dialogue, he won't follow right away. Once his name is grayed out in the party window, you can fight or run your way to the end without risking his health.

Regardless of how you reach Zhed, speaking to Haroj Firemane (near the outpost) completes the quest.