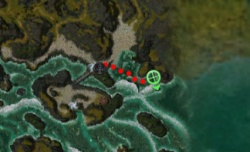 "Nothing satisfies the soul like a good fight, don't you agree? Some of my boys just trapped a mob of Ancient Elder Naga, and you know what they say about elders... they're extra cranky. Strong, these are. I want to turn them loose for target practice. You look like you could use a good fight. What do you say?"

Accept: "Time to put these elders into retirement."
Reject: "Maybe another time."

"Heart still beating? That's a good sign! Seems you are tougher than you look."

The trek through the winding corridors of Maishang Hills can be long if you are unable to leave from Eredon Terrace, or even better, Gyala Hatchery. There are many forks and dead-ends, and your compass does not always point towards the correct path. The patrols you encounter on the way are not difficult, but be wary of engaging more than one at the same time.

You will need to defeat a group consisting of Elder Naga Warriors, Elder Naga Archers, and Elder Naga Ritualists. Although they are not bosses, they seem to share the base double damage trait common to all Factions bosses. As such, they are highly dangerous and should approached with caution. Since most of the damage they inflict comes from attacks, any defensive skills that will cause these to miss can be a great asset. Taking out the Elder Naga Ritualists should be done first, because of heavy AoE damage from Ancestor's Rage.