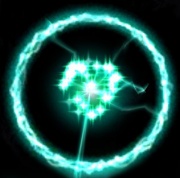 The Channeling Magic attribute reflects a Ritualist's skill when using offensive damage spells. This is not a primary attribute and may be used by secondary ritualists.