Chant:"A Chant bestows a benefit (or 'buff') on allies within its area of effect who meet its requirements." 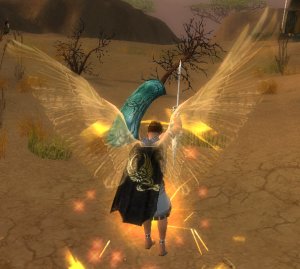 Animation while activating a chant 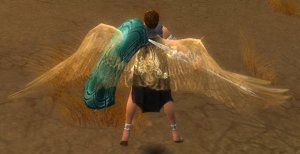 The wings appear spread out, then beat downwards once

Chants are a type of Skill currently exclusive to Paragons which allows them to give Party Members or Allies within earshot a buff.

Each Chant has a trigger condition which ends it prematurely (although one chant, Song of Purification, can be triggered multiple times before it ends). Most chants provide their bonuses when they are triggered. Some chants, such as Defensive Anthem and Song of Power, provide bonuses which last until they are triggered. Chants can have either an Energy or an Adrenaline cost, and have a one or two second Activation Time.

Chants can only be ended prematurely by their trigger condition, or by death. Paragons possess Chants in three of their attributes: Command, Motivation, and Leadership.

Chants also trigger the leadership attribute effect, granting the Paragon one energy for each Ally affected by a Chant, up to a maximum of 1 energy per 2 points of Leadership for each Chant activation.

It is important to differentiate between Shouts and Chants. The most important distinction is that Chants have an activation time and thus can be interrupted. Additionally, Chant skill titles are not in quotation marks, and are not shown above the character's head in a chat bubble when activated. Instead, chant activation can be identified by the glowing wings animation that appears behind the character during activation.

Chants are broken into several different types depending on their skill name and trigger condition: