The land north of Ascalon’s protective Great Northern Wall is occupied by a savage race of beasts known as the Charr.

To the Charr, flame is the physical representation of their gods. In order to keep the gods happy, they must first fulfill their obligation to the flame. To that end, the Charr have constructed a series of sacred buildings known as Flame Temples. On raised platforms, these bestial creatures have inscribed huge circular runes, which define and magically feed the sacred fires. Further defining the ring are pillars of pure obsidian or carved sandstone, sculpted to depict the faces of the mysterious creatures the Charr worship. Between these pillars, in the very center of each of these temples, are the ever-burning sacred flames. The Charr believe that as long as the flames are burning, the gods are pleased. If the flames go out, then the Charr have failed in their duties, and will be punished by the gods. 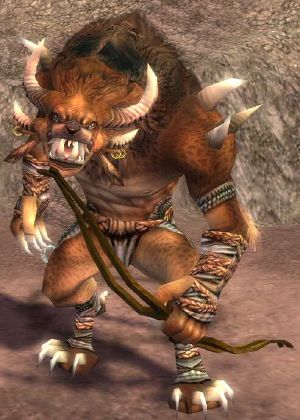 Each temple has its own fire, which is tended at all times by four Charr Flame Keepers. The Flame Keepers have only one job—to keep the Sacred Flame burning. This is the most prestigious position a Charr can occupy; only the strongest, most capable Charr can take this honor, and all other Charr bow to the Flame Keepers.

In addition to the temples, whenever a large Charr warband travels anywhere, they take with them a bronze brazier, lit at a Flame Temple by the Sacred Flame. These braziers are placed upon palanquins, which are then carried from location to location by four Charr Flame Carriers. Each night when they make camp, the Flame Carriers erect a flammable effigy in the shape of one of their gods, then ignite it and let it burn till daylight.

Khan-Ur is the title used by the supreme rulers of the Charr. The first Khan-Ur unified the Charr before the arrival of humans on the Tyrian continent, and the last Khan-Ur was assassinated around the time of the Exodus of the Gods. The four heirs of the last Khan-Ur formed the four High Legions. Although some Charr have subsequently claimed the title, none have been able to hold it for more than a few years.

At around the time of 1070 AE, when the three Kingdoms of Tyria were busy fighting each other in the Guild Wars, none of them took the threat of the Charr seriously due to the fact that they were still held at bay by the Great Northern Wall. However, the Charr shamans had gathered all their forces together north of the Wall and found a way to summon a great devastating magic from the skies. How they organized themselves so well and how they mastered such arcane powers remains a mystery, though the Titans may have helped them for their own purposes, as hinted at by the resemblance of Charr idols to the Titans. They then set out to conquer all the Human lands of Tyria:

Warning: The following text contains spoilers relating to the plot of Nightfall Campaign.

In the quest A Flickering Flame in the Realm of Torment, you find out that the titans appeared to the Charr as fiery gods, and urged them to invade the human world in order to weaken resistance against Abaddon, before ultimately abandoning them.

The expansion allows players to visit the Charr Homelands, which resemble Pre-Searing Ascalon. A Charr Ranger, Pyre Fierceshot, can be recruited after completing the Charr Homelands primary quests and missions. The Charr in EotN are more advanced than those in Prophecies, including characters with dual professions; newer professions such as Ritualists; and advanced weaponry such as Siege Devourers.

In Eye of the North, an Ascalonian unit known as the Ebon Vanguard wage war on the Charr, bringing the conflict to the Charr Homelands. The bulk of the Ebon Vanguard are captured after a battle, causing Gwen and the heroes to pursue the Charr. After raiding a Charr camp in search of the prisoners, they come across a Charr prisoner, Pyre Fierceshot, who offers to aid the heroes in their search in exchange for assistance in finding his warband.

It is revealed by Pyre that the Charr are in a state of civil war. With the destruction of their previous gods, the Titans, many of the Charr have become disillusioned with the Shaman caste. The Shamans in turn have adopted new gods, the Destroyers, and are persecuting any Charr who do not adhere to them. After the heroes help Pyre to rescue his imprisoned warband from the Cathedral of Flames, the Charr rebels assault the Shaman fortress in Sacnoth Valley. Using Siege Devourers and Armored Saurus, the human heroes storm the fortress. The Shaman leader, Hierophant Burntsoul, unleashes several hordes of Destroyers to fend off the attackers, but the new "gods" are overwhelmed and Burntsoul is slain.

With the Ebon Vanguard prisoners freed, Pyre Fierceshot refuses to lead a rebellion, instead sending off the surviving Charr to disperse, spreading the message that the Charr have no gods, after which he joins the humans. Several pockets of Shaman resistance remain to combat the Ebon Vanguard and Charr forces.

All Charr have Charr Carving as their collectable drop. They also all drop Charr Hide, which is a Salvage Item that has a collector. Pre-Searing Charr bosses can drop two other Charr items, the Charr Bag and Charr Salvage Kit.

According to the May 2007 issue of PC Gamer, the Charr will be a playable race in Guild Wars 2. They will also fully take over Ascalon, except for Ascalon City, and settle in the former capital, Rin.