Charr in the Catacombs 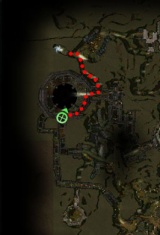 Path from the Green Hills County Catacombs entrance to Oberon the Reviled.

"This Charr agent that you and Devona witnessed leading the Grawl worries me greatly. I've questioned the guards and many of the townfolk, but none have seen him. I suspect that he is using the catacombs to move through the countryside unseen. My men are all busy safeguarding the Wall, and I can spare none of them. If you are willing, I'd like you to go into the catacombs to see if you can find any evidence as to where this Charr is hiding. Perhaps Brother Mhenlo at the Abbey has seen something."

Accept: "I will find the evidence you seek."
Reject: "That sounds too risky."

"A Charr Ranger south of the Wall? Rurik is right to be worried. I have seen nothing, but perhaps Mistress Munne can offer you some assistance. She is much more familiar with the catacombs than I."

"Rurik is wise to suspect the Charr of moving through the catacombs. They are fraught with much danger, but if you were familiar with them they could lead you to almost any region in Ascalon. Seek out my associate Oberan the Reviled. He makes his home deep in the catacombs and will know if any Charr have ventured there."

"You come here seeking Charr? You were wise to seek out Oberan, for no creature, be they living or dead, moves through here without my knowledge. This Charr that you seek comes often to the underground, but he does not make his lair here. The spirits of this place would not tolerate him should he seek to take up residence. If you require proof of his presence, take this... it's a token he left behind during one of his encounters with the denizens of this place. Now then, leave me to my studies. Return to the world of light."

"This is proof enough. You have served Ascalon well this day. I will mobilize the troops and search for this beast."

Head over to Ashford Abbey and speak with Brother Mhenlo who then directs you to Necromancer Munne at the entrance to the Catacombs. Munne will direct you to talk with the necromancer Oberan the Reviled deeper in the catacombs.

You can reach Oberan either by walking down into the Catacombs, taking the path to the right and going down until you reach some stairs into a big rectangular room with a few Restless Corpses in it. Head to the end of the room and take the second right into a cavern full of Deadly Crypt Spiders, keep going down this path until you get to the hallway where Oberan is. Alternatively, after speaking to Munne, map travel to the Barradin Estate, exit and head north-east towards the Catacombs entrance from Green Hills County. This will be a much shorter trip to Oberan (see the map provided).

As you speak to Oberan, he will give you a Sharp Charr Tooth; give the tooth to Prince Rurik to provide the evidence he needs and to get your reward.