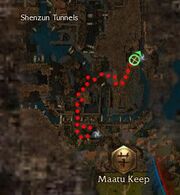 "I have heard much about you but the events are unfolding quickly, and I fear we do not have much time for the pleasantries. Master Togo has gone to meet Mhenlo near the gate to Kaineng City. You should rendezvous with them as soon as possible."

Accept: "I'm on my way."
Reject: "I have some things to finish first."
When asked about quest: "Master Togo awaits you at the gates to Kaineng City. Time is wasting!"

Master Togo: "Mhenlo has been telling me about Shiro's activities in the sewers. It appears that he is amassing his forces for some kind of major offensive. I fear for the city, and for all of Cantha, if he is not stopped now."
Brother Mhenlo: "The emperor has sent a small force into the sewers in an attempt to hold back Shiro and his minions, but I'm afraid they won't be able to hold out much longer. Whatever Shiro is planning, it's a good guess that he's getting ready to move forward."
Master Togo: "It is imperative that we find out what his plans are before he puts them into action."
Master Togo: "<name>, we need you to go down into the sewers and locate the Canthan forces... find out whether they have been able to learn anything about Shiro's plans."

"<name>, we need you to go down into the sewers and locate the Canthan forces... find out whether they have been able to learn anything about Shiro's plans."

"These...beasts have been attacking in massive numbers, and my men are dropping like flies. I have orders to hold this position, but as you can see, we are just barely holding them off."

"The Canthan Empire has suffered gravely... so many lives lost, so many families torn a part.... [sic] My heart is heavy with the loss.

I understand that you have procured both the Staff of Archemorus [sic] and the Urn of Saint Viktor. Master Togo believes that together, these weapons might have the power to bring Shiro to his knees, just as the heroic spirits within them did so many years ago. I pray that he is correct.

Please speak to my attendant known as the Emperor's Hand. He will arrange your passage into the sewers."

Battle in the Sewers

After receiving this quest, map travel to Maatu Keep and exit into Pongmei Valley to meet Master Togo and Brother Mhenlo, then go back to Maatu Keep. Exit from Maatu Keep into Shenzun Tunnels and travel north-east (this will take you to the portal into Sunjiang District, but you cannot enter here yet). Along the way there will be multiple groups of Afflicted to deal with. Once you reach your goal, talk to Commander Jafai. After that simply map travel to Kaineng Center and exit to Raisu Pavilion where you will need to talk to Emperor Kisu for the reward.