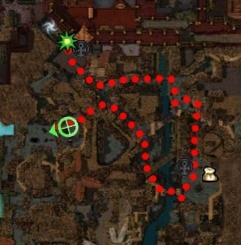 Are you by any chance...? No, it is you! This is well and truly an honor. I did not think I would get the chance to meet one of the heroes responsible for Shiro Tagachi's defeat. Cantha owes you a debt of gratitude for what you have done.

Since the fall of the Betrayer, Cantha has continued the fight to protect itself. The Ministry of Purity was formed to empower the people, that we might stand together as a stronger whole, to keep our homes and loved ones safe. Countless lives were lost to the Afflicted Plague, and that is a horror that we must never allow to happen again.

The Ministry of Purity has fought tirelessly against the Afflicted, and the end seems to be in sight, at last. I wonder... if this would not be too forward of me to ask, would you lend Cantha your aid once more? Afflicted have been found in Bukdek Byway. I go there to face them, and I would be privileged to have you stand at my side.

Accept: "Very well. It's time to see this through."
Reject: "I've dealt with Shiro. The Afflicted are your problem now."
When asked about quest: "..."

It doesn't matter how many times I see these creatures, I'm never able to forget that they were once Human

Imagine how terrifying it must have been for them. Slowly losing themselves to something so twisted. No one should have to leave this world in that way.

Some part of me looks at the afflicted and wonders: Who where they before? What must their lives have been like?

"It is a great thing that we have accomplished this day. We have laid to rest those souls unfairly claimed by the Affliction, and we have made Kaineng a safer place for those who remain. I hope that you will continue to assist us in our endeavor. Please take this as compensation, along with my gratitude."

There are three groups of Afflicted in the northern section of Bukdek Byway that need to be killed. The mobs include spirit spammers and the new Afflicted Necromancers who can heal AND do a lot of damage, so be prepared.